The campaign period for the local election has officially started with candidates making the rounds of their constituencies. 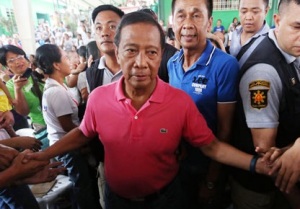 Survey
Sen. Grace Poe topped the Bilang Pilipino-SWS mobile survey conducted two days after the recent presidential debate in Cebu City. Poe got 35 percent followed by Mayor Duterte with 26 percent. For some reason, the survey results were released in the middle of the night and the first thing that the lady senator did when she was informed about it was to wake up.

Offended
Mayor Duterte admits he hates being compared to US presidential hopeful Donald Trump. The outspoken Trump is a bigot and a known womanizer. Duterte insists, “I’m not like him! I’m not a bigot!”

Batman v Superman
Making a killing at the box office right now is the movie ‘Batman v Superman: Dawn of Justice.’ To give you an idea about the story, Batman is convinced that Superman has become a threat to humanity. Hence, his attempt to end the Man of Steel’s reign on Earth. The movie’s working title was ‘Roxas vs. Duterte.’

Life Story
Supporters of Mar Roxas have recently  released a comic book chronicling his life as a public servant – including a controversial chapter on the role he played during the onslaught of Typhoon Yolanda in Tacloban City. Critics expect the comic book to top National Book Store’s bestseller list – fiction category.

Life Story III
Supporters of Mar Roxas has turned his life story into a comic book. Not to be outdone, Vice President Binay’s life story has been turned into a Crime/Mystery novel.

Local Elections
The campaign period for the local polls has officially started with candidates making the rounds of their constituencies. Some news reports described Day 1 as “a circus” with political clowns trying hard to entertain the voters. The reports drew outrage from a group of clowns who issued a strongly-worded statement saying they were “very much offended by the comparison.”

[Update: The tarps have been removed last Sunday according to a netizen from Pagbilao.]

Birthday Boy
On Monday, March 28, two famous persons celebrated their birthdays: Mayor Rodrigo Duterte and pop icon Lady Gaga. Of course, Lady Gaga and Mayor Duterte are different: One is daring and eccentric, and the other is Lady Gaga.

Elsewhere
“Will voters then settle for an “inexperienced” but fresh leader, a “vigilante” straight-talking leader, a performing but allegedly “corrupt” leader, a decent leader accused of being pretentious by some, or a sick leader absent in the second debate? Who do you think the millennials will ultimately vote for?”
~Josiah Go, Unmasking presidential candidates