Mindanao Conflict
Reports say the military has captured at least 15 camps of the Moro Islamic Liberation Front in Central Mindanao. The largest of the 15, located in Maguindanao is known as Camp Vietnam and is equipped with watchtowers and an obstacle course… further fueling speculations the rebels are now secretly training their own contingent for the 2012 London Olympics.

Postscript to Beijing
The Beijing Olympics is officially over. London is preparing now for the staging of the quadrennial games in 2012. Michael Phelps is preparing to equal his eight gold medal-haul; Usain Bolt is preparing to break his century dash record, and Peping Cojuangco of the Philippine Olympic Committee is preparing for the barrage of criticisms, insults, and backbiting when he arrives in Manila.

Pacquiao on Pinoy Athletes
Manny Pacquiao is reportedly saddened by our athletes’ monumental failure in the Beijing Olympics… but is nonetheless relieved that nobody would collect his promised incentive of one million pesos.

The Chinese government praised its entire police force for keeping the Beijing Olympics secure and peaceful. The cops find the commendation unusual because normally, they only receive praises when they shoot Tibetan protesters.

Briefly Noted:
The Inquirer and the Flag Carrier
Yesterday, August 24, Inquirer sports editor Teddyvic Melendrez wrote that Miguel Molina was “robbed” of the chance to carry the Philippine flag during the opening of the Beijing Olympics. Melendrez had written a week ago that Molina was “unceremoniously dispossessed of the honor by Manny Pacquiao.” The rest of the world is talking about winning medals and yet, Filipinos are still bickering over who should have carried the flag. Petty.

Tabloid Offices Robbed
At least 10 unidentified motorcycle-riding men brandishing handguns and shotguns robbed the offices of two tabloids – Remate and Tiktik in Port Area, Manila before dawn today. The robbers carted away P160,000 from Tiktik, P20,000 from Remate… and from both offices, the final drafts of several sleazy advice columns that were scheduled to be published next week. 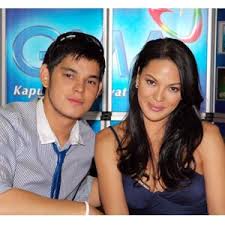 Annabelle Rama vs. GMA 7
Feisty talent manager Annabelle Rama is fuming mad over GMA7’s decision to stage the post-birthday blowout show of Marian Rivera and Dingdong Dantes on Wednesday, August 27 at the Araneta Coliseum, the same day her son Richard and KC Concepcion’s movie will open. Rama has threatened to transfer his sons Richard and Raymond to ABS-CBN to which Gabby Lopez allegedly said, “Richard? Sure, why not? Raymond? Hmmm… Piolo, Sam, Uma, Eric Santos, Jed Madela… let me check huh if we still have room for one more.”

After last Friday’s gruesome murder of 10 people in a branch of RCBC in Cabuyao, eight people were killed in a murderous shooting spree in Calamba City yesterday… officially making Laguna province the second most dangerous place in the world today after Iraq.

Police in Laguna are having a difficult time catching the suspects in the RCBC murder – something that’s not surprising considering that the police couldn’t even catch a single jueteng collector in the province.

Senate President Manuel Villar retains the title “richest senator” this year – successfully holding off a late surge from Jamby Madrigal who was hoping to snatch the title after her billionaire aunt’s death last month.

Militant labor leader Crispin Beltran died of head injuries after falling from the rooftop of his home in Bulacan. Now that’s what you call “fallen comrade.”

After falling off the roof of his Bulacan house, former KMU leader, staunch government critic, and leftist party-list representative Crispin Beltran died of head injuries. Rumors say former AFP Chief of Staff Hermogenes Esperon hailed the demise as a boost to the military’s goal of wiping out insurgents by 2010.

Leftist leader Crispin Beltran is dead at 75. Militants are preparing a hero’s burial for Ka Bel that would include a 21-gun salute… from a squad of New People’s Army rebels.

Young actress and UN ambassador for the World Food Program KC Concepcion was shocked and saddened by the hunger situation in Lanao Del Sur. The experience was a huge reality check for KC who didn’t realize – until her Mindanao visit, the impact of her Mommy Sharon’s binge eating.