To Senator Revilla’s credit, dozens actually believed everything that he said. All of them were Ramon Revilla Sr.’s children. 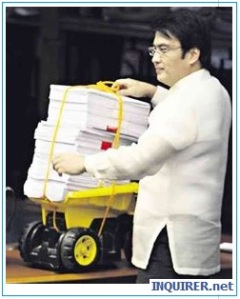 In his privilege speech last Monday, Bong Revilla vehemently denied the accusations being leveled against him. And he felt really strange – mainly because in the past, when his wife would accuse him of something, he’d usually admit to it and apologize.

An enraged Bong Revilla said, “I have nothing to do with this scam, those whistleblowers, nor Janet Lim-Napoles. I have no dealings or transactions with them.” When God heard this, he slapped an angel.

The actor turned senator ended his speech saying, “I am not afraid. I have already surrendered my fate to the Lord.” His wife Lani Mercado was also quoted to have said, “We lift it all to the Lord.” Sought for reaction, the Lord said, “Kung maka-namedrop naman kayo! Tse!”

#Throwback
Before ‘Boy Pick-up,’ there was ‘Boy Bawang.’ 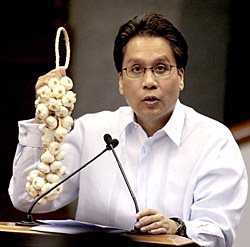 Hammer Time
CNN reported that five thieves armed with hammers robbed a jewelry store in Memphis, Tennessee. Shoppers were shocked when they learned that at least 65 Rolex watches were stolen, and were even more shocked when President Aquino and Mar Roxas showed up at the crime scene.

God-Given?
Pope Francis says the Internet is a gift from God. A slow Internet connection however is a work of the devil. 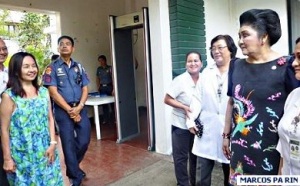 Imelda and Gloria
Former First Lady Imelda Marcos visited former President Gloria Macapagal-Arroyo at the Veterans Memorial Medical Center. According to Imelda, the government’s treatment of GMA “is so cruel… so unjust. It is not human.” When Manila Film Center ghosts heard this, they died (again).

According to the Ilocos Norte representative, the government is unjust and cruel to GMA. Imelda Marcos championing against injustice will be like Tito Sotto standing up against plagiarism.

Diet
According to ABS-CBN News, Robin Padilla’s wife, Mariel Rodriguez is now on her 11th day of a 16-day juice diet. The nutritionist’s advice to Mariel? Strictly no meat, no rice, and no partying at Privé.
———————————————–
“No guilt is forgotten so long as the conscience still knows of it.”
~ Stefan Zweig, Beware of Pity

Sound Bites
“The internet, in particular, offers immense possibilities for encounter and solidarity. This is something truly good, a gift from God.”
~Pope Francis

“That he did not do so while the impeachment court was in session makes him an accessory to the conspiracy he now complains about. That he is doing so now, after plunder charges have been filed against him, makes him sound like a gossipmonger who tries to project an air of innocence by smearing everyone else around him. No reasonable person can seriously assign any value to his speech.”
~Prof. Randy David, Kap’s Amazing Stories [Read full article here.]