Unsuccessful, Nixon retaliated by barring reporters of the Post from entering the White House.

‘THE SHAPE OF WATER’ won Best Picture at the 90th Academy Awards. Helmed by Mexican director Guillermo Del Toro, ‘The Shape of Water’ tells the story of a woman who fell in love with a monster. The film’s working title was ‘Honeylet.’

Best Actress winner Frances McDormand played the role of Mildred Hayes – an angry, grieving mother seeking justice for her daughter. Official reports say Mildred’s daughter has been murdered — although the VACC insisted she died due to the Dengvaxia vaccine. 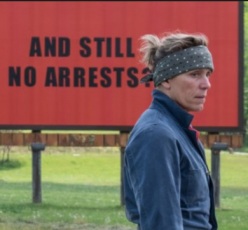 In her Oscar winning performance, Frances McDormand played the role of a devastated mother seething at the lack of progress in the case of her murdered daughter. Using three billboards on the outskirts of her town, she wages war against the local police chief who was reportedly a regular at videoke parties, concerts, press conferences, Congressional hearings, and other social events.

Duterte mouthpiece Harry Roque watched the telecast of the 90th Academy Awards. Roque was raving about and rooting for ‘Three Billboards Outside Ebbing, Missouri’ when the ceremonies started. Before it was over, he was cheering for ‘The Shape of Water.’

Meryl Streep now has 21 Oscar nominations including a best actress nod for her role as publisher Katharine Graham in the movie ‘The Post,’ a best picture nominee. Steven Spielberg directed ‘The Post’ which tackled the importance of freedom of the press. Rodrigo Duterte calls it “the worst film in recent years.”

In the movie, then US President Richard Nixon tried to stop the Washington Post from releasing damning evidence about America’s unwinnable war in Vietnam. When the newspaper ran a series of investigative stories on the Watergate scandal, Nixon retaliated by barring reporters of the Post from entering the White House. When Mocha Uson heard this, she asked her Facebook followers, “Naniniwala ba kayong ang Watergate scandal ay produkto lamang ng fake news?”

‘The Shape of Water’ actor Doug Jones says it took five hours for make-up artists to transform him into a fish. In comparison, it took Harry Roque one term in Congress to transform himself into Duterte’s bitch.

Sound Bites
But the idea of allowing China to exploit part of the Philippines’ exclusive economic zone is not only dangerous but also unlawful, Carpio warned: The “co-ownership” model would amount to ceding half of the West Philippine Sea to the Chinese, and “there is absolutely no way under the Constitution” that any sitting Philippine administration could give away the national patrimony like that.
~Editorial, Not only dangerous but unlawful