IT’S PROBABLY the biggest news of the week. Everyone is talking about it. It’s over for Angelina Jolie and Brad Pitt!

TMZ reported that “Angelina reached her breaking point last week over Brad’s consumption of marijuana.” When news of the separation first broke out, Angelina got messages of support from her dad, her brother and President Duterte.

House Inquiry
The House of Representatives has opened its inquiry into the alleged proliferation of drugs inside the New Bilibid Prison. The hearing was presided over by Congressman Vitaliano Aguirre.

Witnesses presented by DOJ Sec. Vitaliano Aguirre claimed that then Justice Secretary Leila De Lima received millions of pesos from drug lords. Reporters described the hearing as “explosive.” Others described it as “shocking.” President Duterte called it a “success!”

Independent
Presidential Communications Secretary Martin Andanar said Malacañang did not have a hand in the inquiry that painted Leila De Lima as a drug coddler. Andanar added, “I’d like to say the House is also independent.” Like the President, Andanar has apparently developed this habit of telling jokes.

Harassment
During the hearing, congressmen announced Senator De Lima’s cellphone number and home address. The senator lambasted the solons’ “utter lack of sheer humanity.” On Tuesday night or a few hours after her phone number was made public, De Lima said she received more than 2,000 nasty and angry messages. And that’s just from Sandra Cam. 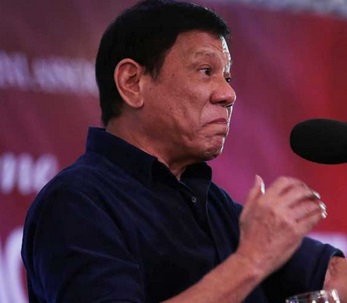 FU!
Earlier this week, the European Union (EU) Parliament called on the government to “put an end to the current wave of extrajudicial executions and killings” of drug suspects. Reacting to the statement, President Duterte said, “Nabasa ko ang EU condemnation sa akin. Sabihin ko sa kanila, ‘Fuck you!’” When asked for reaction, the European Union said, “We’re too busy right now. Can we ignore him some other time?”

Responding to the EU’s criticisms, President Duterte said, “Fuck you.” In separate text messages, the UN and Pope Francis told the EU, “Welcome to the club!”

This just in: Antarctica has also appealed to President Duterte to put a halt to extrajudicial killings in the country. A furious Duterte said Antarctica should shut the fuck up, stop meddling in Philippine affairs and focus instead on its melting ice sheets.

Movement
According to Communications Secretary Martin Andanar, there is an “Oust Duterte Movement.” He couldn’t give any details though. Allegedly, the movement’s goal is to make the President sound and look bad in international media. That explains the movement’s choice for spokesperson: the President himself.

Pacquiao
As if following a carefully-written script, Manny Pacquiao on Monday moved to declare the Senate justice committee vacant. Online, he was applauded by Duterte die hards although he would have been applauded by a larger number of people had he declared his own Senate seat vacant.

It was Manny Pacquiao who moved to declare the Senate justice committee vacant. That’s one rare moment when we wished Pacquiao was absent from the session instead.

Going back to the #Brangelina break up…
Reaction to the breakup ranged from celebration (#TeamJen) to devastation. Sa Malacañang, napaiyak at nahulog sa upuan si Secretary Martin Andanar.

Brad and Angelina have six children including one from Vietnam, Ethiopia and Cambodia. Now they’re breaking up. And President Duterte was like, “See? Even Brad and Angelina are leaving the United Nations!”

Angelina Jolie and Brad Pitt have called it quits. Some people are blaming actress Marion Cotillard. Some are blaming Brad Pitt’s weed and alcohol consumption. Malacañang is blaming the media.

Dutertefied
Filipinos fought for press freedom to come up with headlines like this on the anniversary of the declaration of Martial Law. #ProudMoment

BREAKING: The Manila Standard has been declared ‘the best newspaper in the solar system.’ Congratulations!
————————————————————————————————————————————–
“Once a government is committed to the principle of silencing the voice of opposition, it has only one way to go, and that is down the path of increasingly repressive measures, until it becomes a source of terror to all its citizens and creates a country where everyone lives in fear.”
~Harry S. Truman

The Bloody Biography of Rodrigo Duterte by Sheila Coronel
“If he wants to remain true to his beliefs, he must find a way to articulate his position on human rights, foreign policy, and the international community that goes beyond expletives. He’s in uncharted territory now. The Davao playbook no longer suffices. It’s time to write a new one.”