When people chose to be silent, Agot Isidro dared. “You’re not bipolar. You are a psychopath.”

PRESIDENT DUTERTE is in office for 100 days now. When asked to rate his performance on a scale of 1 to 10, with 10 being the highest, Duterte gave himself a 6; Senator Lacson gave him a 7.5, and funeral parlors gave him a plaque of appreciation.

Serial Killer
Amid the increasing number of deaths in connection with the government’s relentless war on drugs, French newspaper ‘The Liberation’ – in a four-page banner story – dubbed Duterte a “serial killer president.” When Duterte heard about this, he Googled, “What’s ‘Go to hell!’ in French?”

Serial Killer II
French newspaper ‘The Liberation’ called Duterte a “serial killer president.” Duterte’s chief apologist in the Senate, Alan Peter Cayetano will release a statement as soon as he figures out a way to blame this on De Lima, Drilon and Trillanes.

Psychopath
In a Facebook post, actress Agot Isidro advised President Duterte to have himself checked by a psychiatrist. The actress said, “You’re not bipolar. You are a psychopath.” Duterte diehards were quick to retaliate. They called on the Bureau of Immigration to immediately deport the actress saying “she’s obviously French.” 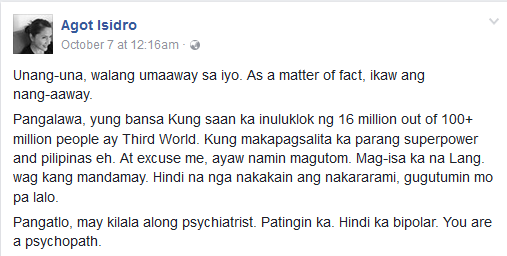 Psychopath III
On Facebook, actress Agot Isidro criticized President Duterte for his series of tirades against the US, the UN, and the European Union. Isidro even advised the President to have himself checked by a psychiatrist saying he’s “a psychopath.” Presidential spokesperson Ernesto Abella said the actress was entitled to her own opinion – and then texted, “Alam mo na ang gagawin mo!” to Mocha Uson.

Imagine II
Presidential spokesman Ernesto Abella said, President Duterte’s words must not be taken literally. For example, when the President said he would kill his children if they were into drugs, that couldn’t be true. Paolo Duterte is very much alive.

Cocaine User
Davao City Vice Mayor Paolo Duterte who has been accused of being a drug user said, “May isang senador diyan na gumagamit ng cocaine.” He made the accusation without presenting any evidence. And President Duterte was like, “Anak nga kita.”

Jesus Christ!
Reminiscing the day President Duterte offered him his current job, Presidential Communications Office chief Martin Andanar said, “This must be how the apostles felt when Jesus told them to follow Him. Like the apostles, I obeyed.” Andanar couldn’t recall though Duterte’s exact words then because they were in Aramaic. 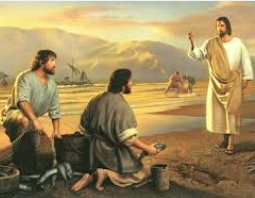 Jesus Christ! II
Presidential Communications Office chief Martin Andanar likened himself to the apostles and President Duterte to Jesus when he offered him his current job. A mesmerized Andanar said he just “obeyed” Duterte who promised to pay him 100,000 shekels a month.

Hostage Incident
A 32-year-old man who took three people hostage at SM City Dasmariñas on Sunday afternoon was shot and killed by the police. Reports say the man entered the mall with a concealed weapon around 11 am. Shortly after, he was heard “cursing and shouting” attracting the attention of shoppers who thought President Duterte was insde the mall.

Sound Bites
“Rodrigo Duterte’s first 100 days as president have been marked by state-sanctioned violence on a truly shocking scale. His brutal crackdown on those allegedly involved in drug crimes has led to carnage on the streets and the obliteration of key human rights, including the right to life and to due process.”
~Amnesty International

Elsewhere
Philippines secret death squads: officer claims police teams behind wave of killings
“Now, for the first time, a serving officer is revealing the inner workings of what he claims is an officially sanctioned, albeit secret, campaign to rid the streets of unwanted citizens.”

How Facebook algorithms impact democracy
“In every attack, Mocha Uson provides no evidence for her ad hominem accusations, but they have been shared often that many believe they are true.”

Do not be deceived.