“Get hold of a picture of mine, place that in the altar, Santo Rodrigo.” 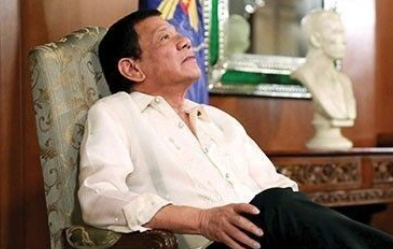 This article was first published in the Opinion Section of the Philippine Daily Inquirer last Nov. 4.

IN HIS All Saints’ Day and All Souls’ Day message, President Duterte urged Filipinos to “emulate our saints” and help in “alleviating the suffering of others.” To which, Filipinos replied, “You first.”

Less than 24 hours after the release of his All Saints’ Day message, the President mocked the Filipinos’ observance of Undas calling saints “fools” and “drunkards.” He then suggested, “Get hold of a picture of mine, place that in the altar, Santo Rodrigo.” His Ka-DDS supporters were shocked. They said, “He is not a saint! He is our god! No to demotion!”

A Manila policeman attending a Halloween party was allegedly caught snorting cocaine in the restroom of a high-end bar in Taguig City. During questioning, the suspect couldn’t give clear answers and was talking utter nonsense prompting one officer to yell, “Stop acting like the president!”

President Duterte sent flowers to the tomb of Ninoy and Cory Aquino at the Manila Memorial Park on All Saints’ Day. Thankful, the Aquinos couldn’t wait to return the gesture.

Militarization?
President Duterte has ordered a military takeover of the Bureau of Customs (BOC). When he heard the news, Paolo Duterte said, “Challenge accepted.”

Another retired military general, Rey Leonardo Guerrero has been appointed commissioner of the Bureau of Customs. His term officially started last Oct. 30 and will end until the next shabu shipment slips past the BOC.

Reports say President Duterte has full trust in Commissioner Guerrero’s capabilities. In fact, this early, he’s sure of where to transfer Guerrero when he gets fired as Customs chief.

The President justified his appointment of military men in government saying they were the ones who delivered. That’s actually true. Under the watch of former Customs Commissioners Isidro Lapeña and Nicanor Faeldon, some P20-B shabu shipment were delivered.

Bets
According to President Duterte, he will campaign next year for candidates who are “honest” and who are “not corrupt.” Imee Marcos and Jinggoy Estrada are hoping it’s just another Duterte joke.

New Low
From 113th last year, the Philippines’ ranking fell to 124th this year in World Bank’s Ease of Doing Business. The Department of Trade refuses to accept that. You know who else disagrees? Drug smugglers.

Solution
To address the soaring inflation, President Duterte has signed an executive order (EO) that will supervise and coordinate a barter trade in Mindanao. Duterte’s EO took effect last 6000

Trolls
Facebook has taken down several pro-Duterte Facebook pages due to violations of policies. Mark Zuckerberg has since apologized to Duterte supporters for loss of extra income.

Duterte II
Brazil has elected far-right candidate Jair Bolsonaro as president. Political analysts describe Bolsonaro as the Rodrigo Duterte of Latin America. He is a populist, a misogynist, and an advocate of violence and extrajudicial killings. Bolsonaro has denied though his eldest son is a drug smuggler.

Sound Bites
“The Bureau of Customs under military control is (1) a patent violation of the civilian supremacy clause of the Constitution & civil service rules; (2) an obvious attempt to undermine the integrity of the military by placing its officers in positions where they may be corrupted.”
~Former Solicitor General Florin Hilbay