Philippine President Rodrigo Duterte watched the Pacquiao-Matthysse bout in Kuala Lumpur. When he came face to face with the two boxers, he told Matthysse, “You lost!” Then, he told Pacquiao, “Yuan!”

In a post-fight interview, President Duterte says he’d rather see Manny Pacquiao retire soon. Specifically, he believes Manny can retire in 3 to 6 months.

Filipino boxing great Manny Pacquiao won against Argentine pug Lucas Matthysse in Kuala Lumpur. As expected, sponsorship logos were printed on Pacquiao’s boxing trunks. There’s Ricoa, GCOX, Motolite, and a couple more. Much to the surprise of many Filipinos, there was no #BongGoTayo. 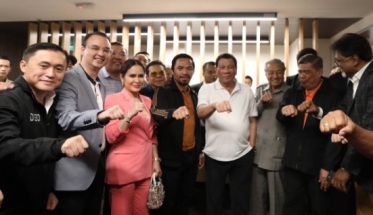 It was the 60th career win for Manny Pacquiao. Addressing the ecstatic crowd, Pacquiao said, “Thank God for this victory.” God was quick to deny though He had a hand in the victory.

Tito Sotto was also at ringside in Kuala Lumpur. After watching Pacquiao cruise to victory, Sotto tweeted, “I thought I was watching Manny 10 years ago. Mabuhay ka Sen and Champion Manny Pacquiao.” There’s no truth to rumors though that Sotto made a promise to Pacquiao he’ll have Inquirer articles linking him to starlets taken down.

The Tulfo siblings lauded the victory of Manny Pacquiao. After the fight, the Tulfos gave him a standing ovation and 60 million rounds of applause.

Some netizens say the victory will help boost Manny Pacquiao’s chances of winning a higher post in the 2022 elections. To which, House Speaker Alvarez said, “What elections?’

CompuBox scores showed Manny Pacquiao landed 44 percent of his power punches while Lucas Matthysse landed just 28 percent. To give you an idea of how bad Matthysse performed, even some Gilas Pilipinas members landed more punches than him.
—————————————————————————————————————–
“The height of your accomplishments is determined by the depth of your convictions.”
~ William F. Scolavino

Also…
Check out my article in the Philippine Daily Inquirer. Here’s the link.

One thought on “CHAMP AGAIN, YOU KNOW”