I HAVE stopped listening to Rodrigo Duterte’s interviews and speeches. Instead, I decided to watch HBO’s Emmy Award-winning limited series ‘Big Little Lies.’ Same themes – deception, abuse of power, and murder – but with likeable characters.

Duterte said he would not cooperate with the Ombudsman’s probe into his alleged undeclared wealth and threatened to create a special body to investigate the Ombudsman instead. In response, Ombudsman Conchita Carpio Morales said, “This office will not be intimidated.” Unfortunately for Duterte, there are no Gordons, Sottos, or Pimentels at the Ombudsman to protect him.

Duterte dared, “Shoot me if I have more than 40 million pesos (in the bank).” That is unnecessary and a total waste of bullet. Everytime he opens his mouth, he shoots himself in the foot. That’s fine.

Amid reports he misdeclared his wealth, Duterte said, “Shoot me if I have more than 40 million.” Thinking Filipinos won’t do that to you Mr. Duterte. They’d rather see you alive – in prison.

Emergency
Allies of Rodrigo Duterte in the Lower House wants to grant him emergency powers to “take over” the operations of the Bureau of Customs. The House ways and means committee described the recommendation as “immediate” – while the Davao Group described it as “an answered prayer.”

New Group
In a press conference held Tuesday, Vitaliano Aguirre and Persida Acosta expressed support for a new group that called itself Citizen National Guard. The group aims to “defend the republic against enemies of the state.” In response, the state said, “No, thanks!”

Vitaliano Aguirre and Persida Acosta led the launching of a group called Citizen National Guard. Reports said the group was formed to protect the republic against “enemies of the state.” Which explains why mirrors were banned during the press con.

Also during the press conference, the newly formed group identified the “enemies of the state.” The list includes the CPP-NPA, ISIS-inspired terrorism, and drug cartels. Pulong Duterte was like, “May galit ba kayo sa akin?”

Wiretapping
A month after TV cameras at the Senate captured the screen of his cellphone showing a text exchange with VACC’s Jacinto Paras plotting against Sen. Risa Hontiveros, Vitaliano Aguirre filed a wiretapping case against the lady senator. Once tagged by Hontiveros as “fake news king,” Aguirre’s case is expected to be junked because text messages are not covered by the Anti-wiretapping Law. Even Aguirre’s case is fake.

Dogs
Duterte defender Tito Sotto is filing a libel case against the people behind popular Facebook page ‘Silent No More PH’ for calling him and other staunch Duterte allies at the Senate, “Malacañang dogs.” Other senators are reportedly keen on filing a similar case. Unverified reports say they are seeking 10 million pesos in compensatory damages and a year’s supply of Pedigree. 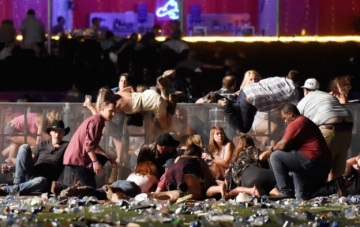 Las Vegas Massacre
Our thoughts go out to the victims of the mass shooting in Las Vegas, Nevada. The carnage left at least 59 people dead and more than 500 injured. Concerned Americans are now calling for stricter gun control. The Philippines can relate to mass killings. For months now, concerned Filipinos have been calling for presidential control.
———————————————————————————————————————————
“Your complaints, your drama, your victim mentality, your whining, your blaming, and all of your excuses… Let go of your nonsense. Let go of the delusion that you deserve better.”
~Steve Maraboli, ‘Unapologetically You: Reflections on Life and the Human Experience’

One thought on “OF BULLIES AND BALLS”