PRESIDENT DUTERTE was in Moscow recently. He had a brief conversation with Russian President Vladimir Putin. He said, “You are a powerful leader. I admire your tyrannical mindset.” There’s no word yet on how Duterte responded.

Sacked
President Duterte fired Dangerous Drugs Board (DDB) chair Benjamin Reyes for telling the media there were 1.8 million drug users in the country: people who exhibit changes in behavior, hallucinations, and paranoia. Duterte insists the number is from 3 to 4 million. I believe it’s 16 million. 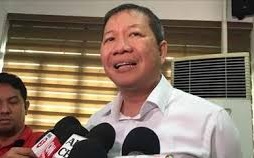 In a televised speech, President Duterte fired DDB chair Benjamin Reyes. Addressing the official, Duterte said, “You’re fired today. Get out of the service. You do not contradict your own government!” Malacañang is now accepting applicants for the vacated post. To qualify for the job, aspirants must meet the following criteria: experience, dedication, and disregard for truth.

The DDB chair has been fired. Malacañang has created a three-man search committee to look for a replacement. The three members of the committee are all Bong Go.

Fake
On Wednesday, President Duterte said the chief of police of Malabang, Lanao Del Sur was beheaded by the Maute group. The next day, Malabang police chief Senior Inspector Romeo Enriquez surfaced and told the media, “I am still alive!” Enriquez fears losing his job though because he contradicted his own government.

ISIS
The ISIS terror group has reportedly established a branch in Mindanao, and Abu Sayyaf leader Isnilon Japilon is their point man. In an intercepted message, ISIS revealed its plan to sow terror, fear, and divisiveness in the country saying “Duterte cannot do it alone.”

Leaked
The transcript of last month’s phone conversation between US President Donald Trump and President Rodrigo Duterte had been leaked online. Trump and Duterte talked about North Korea’s Kim Jong Un, with both leaders describing Kim as a “madman.” In response, Kim Jong Un was like, “Hiyang-hiya naman ako sa katinuan n’yo!”

Leaked II
According to the leaked transcript, when Donald Trump asked Duterte about Kim Jong Un, Duterte answered, “He is not stable, Mr. President.” In a statement released by Pyongyang, the North Korean leader admitted that being called ‘unstable’ by someone like Duterte was a double insult. 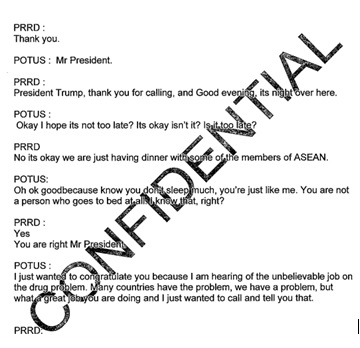 In case you missed it, here are portions of the Trump-Duterte phone convo translated into Tagalog:

Sound Bites
“I urge you to speak out with truth even against the overwhelming tide of popular opinion and reach out to the oppressed and disenfranchised. When you face threats to the sanctity of human rights or the stability of our democracy, give your all to protect these freedoms. Give your all to protect our nation and our people.”
~Chief Justice Ma. Lourdes Sereno, Commencement Address, ADMU, 5.26.2017

One thought on “CONFIDENTIAL”