THERE WAS a gathering of Duterte fanatics led by Mocha Uson, Jimmy Bondoc, Kat De Castro, Vivian Velez and erstwhile Janet Napoles lawyer Bruce Rivera in Luneta last April 2. The group called for the ouster of Vice President Leni Robredo. According to the NCR Police Office, the rally attracted only 3,500 Ka-DDS – prompting a local sanitary inspector to drop by the venue after receiving reports the rally was “nilalangaw.”

3,500
#PalitBise organizers Mocha Uson, Jimmy Bondoc, Arnell Ignacio, Vivian Velez and Bruce Rivera could only mobilize 3,500 of their fellow Ka-DDS for Sunday’s rally in Luneta. To give you some perspective, the number of EJK victims was even larger.

Online Appeal
Organizers appealed to their fellow Ka-DDS online to join the Luneta rally on Sunday. “Thousands” were not able to show up though because, you know, computers cannot attend rallies.

#PalitBise
Organizer Jimmy Bondoc said he created the hashtag #PalitBise for the rally. And the hashtags #PalitCareer and #HindiBusy for the organizers. 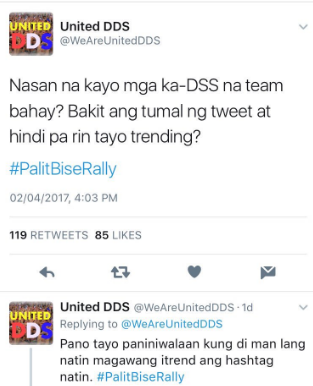 No. 2: The Fault in Our Starlets

And the No. 1 movie remake inspired by the #PalitBise rally in Luneta:

Birds of a feather…