Vice President Binay was the biggest loser in the April 18-20 SWS survey.

DESPITE HIS tasteless comment about rape, Mayor Rodrigo Duterte’s popularity continues to surge based on the recent pre-election surveys. He is No. 1 in the Pulse Asia poll and he is No. 1 in the SWS survey – which explains his latest campaign slogan and mantra: Si Mayor dapat ang mauna!

Loser
Vice President Binay was the biggest loser in the April 18-20 SWS survey dropping to fourth place with 14 percent – down 6 points from 20 percent in the March 30-April 2 survey. Analysts say this thing is kinda new to the Binays because “nasanay silang laging mataas ang porsiyento.”

Alarmed by his slide in the recent SWS survey, the Vice President has reportedly doubled his efforts in the campaign trail. When asked if Binay still has time to sleep, a loyal aide replied, “Panakaw na tulog na lang.”

“Bias”
To fuel anti-Mar Roxas and anti-ABS-CBN sentiments, someone edited a clip from the recent presidential debate to make it appear that ABS-CBN favored Mar Roxas by giving him the questions in advance. It has since been exposed as a hoax. But the people behind the video have succeeded. Statistics showed the edited clip was shared and reposted by netizens who were 50 percent anti-Mar and 50 percent gullible.

Losing
In the latest SWS survey, Alma Moreno failed to enter the Magic 12. She was No. 23. To be fair, she has been praying really hard – and every time she prays, God has an answer: No.

Many people doubted the results of the presidential survey conducted by D’ Strafford Research & Strategies Inc. Some of the questions raised include the following: Who commissioned the survey? How reliable was the method used? AND Why would you name your research firm with a D’? 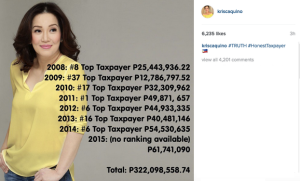 Kris Being Kris
Under fire for using the presidential chopper during an LP campaign sortie, Kris Aquino had an answer to her critics. On Instagram, she posted the amount of income tax she paid for the last 8 years. It totaled more than 322 million pesos. Which only proved that even if you’re earning THAT much, you can’t buy logic.
———————————————————————————————————————————-
“A man is his own easiest dupe, for what he wishes to be true he generally believes to be true.”
~Demosthenes

Sound Bites
“When I started, at least in the first few months, it seemed so impossible to catch up. But now, it’s happening.”
~Congw. Leni Robredo