Quezon City topped the list of cities with the highest number of index crimes such as theft and robbery.

FROM 2010 to 2015, Quezon City topped the list of cities with the highest number of index crimes such as theft and robbery. Which is understandable since the House of Representatives is located in QC.

Returned
Controversial businessman Kim Wong turned over 4.6 million dollars to the Anti-Money Laundering Council for safekeeping. The amount was part of the 81 million dollars stolen by hackers from the Bangladeshi government. Political analysts say, with that behavior, Kim Wong will never make it to either the Senate or Congress.

Returned II
Kim Wong returned the money stolen by hackers from the Bangladeshi government. When asked if they’re willing to do the same, the Marcoses said, “We didn’t connive with hackers.”

Superhero
Bongbong Marcos got flak for releasing a comic booklet that portrayed members of his family as victims following the popular People Power revolt in 1986. The comic book also depicted Bongbong as a (caped) super-hero whose powers include the ability to erase Martial Law memories from people’s minds.

According to GMA News Research, when the Marcoses left the country in 1986, they brought with them 22 crates of cash valued at 717 million dollars; 300 crates of assorted jewelry; deposit slips (124 million dollars) to banks in Switzerland, the US, and the Cayman Islands, and a lot more! If that’s how Bongbong Marcos defines “victim,” I’m willing to be one.

Endorsement
Jollibee Foods Corp. has denied reports that its chairman, Tony Tan Caktiong is endorsing Mayor Rodrigo Duterte. In related news, McDonald’s has denied rumors that one of its mascots, Hamburglar is endorsing Vice President Binay.

Endorsement II
Jollibee Foods Corp. released a statement denying Malaya columnist Rey Arcilla’s claim that the popular food chain’s founder and chairman Tony Tan Caktiong, has endorsed the candidacy of Mayor Duterte. In related news, friends of Rey Arcilla have expressed concern for the columnist’s health when they got word that he was “nakuryente.”

Endorsement III
The controversial Pineda family of Pampanga recently endorsed the candidacy of Mar Roxas. When a reporter asked how it felt to have the backing of influential couple Lilia and Bong Pineda, the LP bet said, “Para akong tumama sa jueteng!” 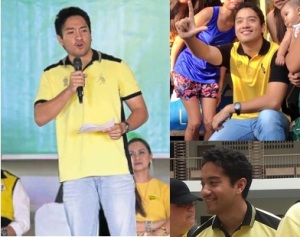 The Son
Mar Roxas’s son from a previous relationship joined his campaign sortie in Laguna the other day. Twenty-two-year old Paolo Zaldarriaga Roxas who studies at Yale University has been described in news reports as “tall,” “toned,” and “good looking” prompting Mar’s rivals to demand a DNA test.

Tragic
Police opened fire on protesting farmers in North Cotabato Friday killing at least two and leaving dozen others injured. The government was heavily criticized for the violent dispersal. People are angry at the administration. Apparently, the dispersal unit was headed by someone who wanted to see Mar Roxas lose.