Since President Aquino assumed office in 2010, the country’s delegates to the Miss Universe pageant have consistently made it to the Top 5 or Top 10… 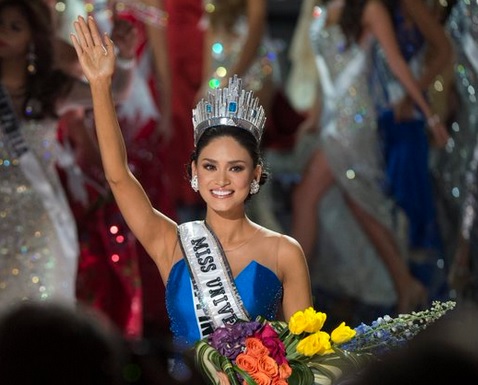 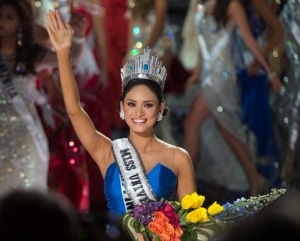 AFTER 42 long years – and 42 seconds, the country has won the prestigious Miss Universe title again. Pia Alonzo Wurtzbach is the new queen. Since President Aquino assumed office in 2010, the country’s delegates to the Miss Universe pageant have consistently made it to the Top 5 or Top 10: Venus Raj, Shamcey Supsup, Janine Tugonon, Ariella Arida, MJ Lastimosa, and now, Pia Wurtzbach. President Aquino’s “record” is phenomenal. The next president has some big eyes to fill. 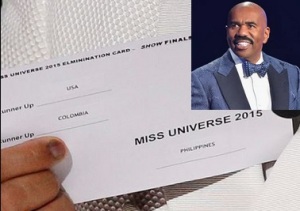 For committing a huge mistake, pageant host Steve Harvey immediately apologized and took full responsibility for the mistake. As for the Marcoses…

Miss Universe 2015 Pia Wurtzbach was actually born in Germany. In other news, Rizalito David has started doing a background check on Wurtzbach.

The Top 5 finalists were grilled on significant issues such as drug abuse, gun control, military bases, medical marijuana, and terrorism – in the pageant’s Question and Answer portion. Or as Alma Moreno calls it, “my worst nightmare.” 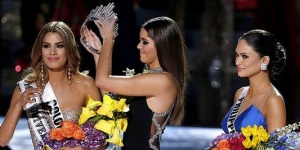 When asked about the presence of US military bases in the country, Miss Philippines mentioned something about the good relations between the two nations and added, “I don’t see any problem with that at all.” According to reports, leftists were not pleased with Pia’s answer. Netizens say the reaction wasn’t surprising at all since leftists are not pleased with almost anything anyway.

Miss Colombia, Ariadna Arevalo Gutierrez, was asked: Drug abuse continues to be one of the world’s most serious social problems. What do you think is the best way to handle this issue? She answered: education in our homes. As expected, Mayor Duterte disagreed. 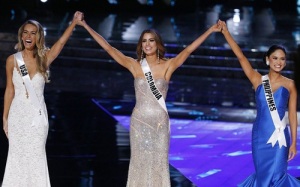 In the last round of competition, the Top 3 candidates, USA, Colombia, and the Philippines were asked the same question: Why should you be the next Miss Universe? Some Filipino politicians sent us the following answers:

Sen. Miriam Defensor-Santiago: I believe that I have the support of the online community. Internet votes will propel me to victory. Besides, I am superior to all the other candidates – intellectually. I’ll definitely nail this question and answer portion.

New Leader
It has been announced that Vice President Binay topped the latest Pulse Asia survey on preferred candidates for president. Critics are hoping Steve Harvey was the one who made the announcement. 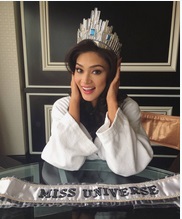 Sound Bites
“I don’t want to run for the Senate because I can’t answer the questions you asked Alma Moreno.”
~Annabelle Rama to Karen Davila

Burn!
One of the most RTd Miss Universe-related tweets was posted by singer-comedienne Ethel Booba, a response to Bayan Muna’s Teddy Casiño’s reaction to Pia’s answer in the Q&A round