On Saturday morning, Kris Aquino posted an apology on Instagram in which she promised, “In the future, I will leave the joking to Vice Ganda.”

Sen. Alan Peter Cayetano will be the running mate of Mayor Rodrigo Duterte. Reports say Cayetano is very happy with Duterte’s decision to seek the presidency. Enjoy it Senator… while it lasts. 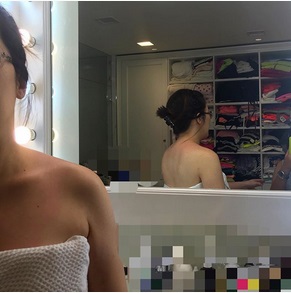 Even Now
Showing a photo of her sunburnt skin on Instagram, presidential sister Kris Aquino called it “quits” with thousands of commuters who were forced to walk several kilometers because of road closures during the APEC Summit last week. Netizens described Aquino’s post as “callous.” Critics said it was “insensitive.” President Aquino said, “Kapatid nga kita!”

Some of her Instagram followers reacted negatively to her “quits na tayo” post. But Kris was unstoppable. To one follower, she replied, “Try walking on cobblestones in 5-inch heels.” In heaven, Cory and Ninoy were summoned to the principal’s office.

Kris Aquino’s Instagram post has been described as “insentive” by a number of netizens. To give you an idea of how insensitive it was, even Secretary Jun Abaya was offended. 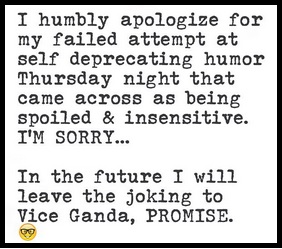 On Saturday morning, Kris Aquino posted an apology on Instagram in which she promised, “In the future, I will leave the joking to Vice Ganda.” I don’t think that’s a good idea.

And the No. 1 predicted “Quits na tayo” statement of Kris Aquino…

Sound Bites
“I cannot accept an American President. Show me your real mother and I will even campaign for you.”
~Mayor Duterte on Sen. Grace Poe

Be sensitive! Have a great week ahead!