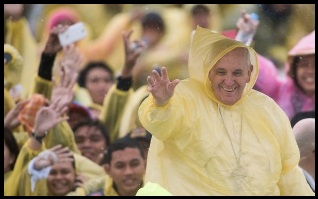 POPE FRANCIS was quoted to have said that Roman Catholics should not breed “like rabbits.” The unprecedented statement shocked pro-life advocates and offended Ramon Revilla Sr.

Tito Sotto, a staunch opponent of the Reproductive Health Law refused to believe that Pope Francis uttered those words. Sotto said the Pope could have been “taken out of context” or the statement was just “an invention.” But that’s just Sotto. The only thing we’re sure of right now is that the statement wasn’t plagiarized.

Rabbits?
The DSWD confirmed reports that almost 500 street dwellers were rounded up and brought to Chateau Royale resort in Nasugbu, Batangas last January 14 and brought back to Manila when Pope Francis had already left. Secretary Dinky Soliman said the homeless were brought there for a training. It was a rewarding experience for the street dwellers who learned so much about housing, socializing, and concealing evidence of abject poverty.

In what critics described was an effort to “whitewash poverty,” some 500 street dwellers in Manila were rounded up on the eve of the papal visit and brought to a resort in Nasugbu, Batangas until Pope Francis had left the country. Or in the words of the DSWD, “coincidence.”

Street dwellers who were interviewed by the Philippine Daily Inquirer said they had nothing to complain about their stay in a Batangas resort during the papal visit. In fact, they appreciated the DSWD’s efforts. They were billeted in spacious rooms, served meals five times a day, attended insightful lectures, and received an ecobagful of goodies. Who are we to judge?

The homeless families are now back in the streets of Manila. They can’t wait for the next papal visit.

Hungry
According to the latest SWS survey, fewer Filipino families experienced hunger. Thanks to the DSWD’s “training” in Batangas.

More Kickbacks?
Former Binay ally and close friend and ex-senior vice president of the Boy Scouts of the Philippines (BSP) Nestor Mercado bared that Vice President Binay, BSP president for 20 years now, got some P200-million in kickbacks in 2010 from the sale of a piece of land owned by the BSP. Mercado said the kickbacks were for Binay’s future presidential campaign. To be fair to Binay, he’s just being a boy scout: Laging handa.

Manny and Harry
Accompanied by his wife Jinkee, 8-division world champion Manny Pacquiao finally met with England’s Prince Harry the other day. Over dinner, he said, “Your mom’s very popular. Sad to hear that her marriage to your father did not end well. I’m sorry she’s gone now.” And then Manny replied, “No, she’s still alive!”

Postponed
The Senate Committee on Local Government has approved the proposed postponement of the Sangguniang Kabataan (SK) elections from its original schedule of February 21 to October 2016. When they heard the news, Filipinos were shocked. Meron pa palang SK?!?

Traffic
According to the 2015 Traffic Index, the Philippines is 9th in cities worldwide with the worst traffic condition. That’s just unfair. We should have ranked higher.

Silent Killer
According to a new study, sedentary behavior or sitting will kill us prematurely even if we exercise. So don’t exercise, just sit back and relax. At least, you’ll die doing what you love most.

A study showed that even if we exercise, sitting will kill us prematurely. Congratulations salesladies!

The Philippines is being represented by pageant veteran Mary Jean Lastimosa. Friends told MJ to remain positive but not too confident despite being a frontrunner. They advised her to think of Mar Roxas.

Miss Canada’s national costume depicted the nation’s love for ice hockey. The costume even includes a hockey scoreboard. Next year, Miss Philippines will top that by wearing a pair of boxing gloves and draping herself in a basketball court.

This year, reports say, there will only be one question for the five finalists. I heard it will be a tough one. Something like, “Why does God allow children to suffer from prostitution and drug addiction?”
——————————————————————————————————————–
“A crowded society is a restrictive society; an overcrowded society becomes an authoritarian, repressive and murderous society.”
~Edward Abbey, Postcards from Ed: Dispatches and Salvos from an American Iconoclast

Sound Bites
“Some think, excuse me if I use the word, that in order to be good Catholics, we have to be like rabbits – but no.”
~Pope Francis