JANUARY is a very busy month for many Filipinos. After the annual Traslacion of the Black Nazarene on January 9, the five-day Papal Visit is next followed by the Sinulog, Ati-atihan, and Dinagyang Festivals all held in honor of the Sto. Niño. This has been the ‘most Catholic’ January we’ve had in years.

Former vice president Noli De Castro, a known devotee of the Black Nazarene joined this year’s ‘Traslacion.’ Kabayan prayed for good health, long life, and the ability to control his emotions when talking to reporters on TV Patrol.

As in previous years, it took the Black Nazarene’s andas or carriage several hours to reach its destination. The procession was very slow-moving. Or as one devotee described it, “EDSA.”

The Traslacion of the Black Nazarene started Friday morning and ended early Saturday morning. The duration of the procession was even longer than the time it took Augustinian missionaries to bring the statue from Mexico to the Philippines in 1607. 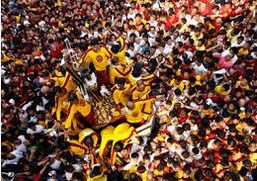 According to authorities, two devotees died during the annual procession. If it’s any consolation, they died doing what they loved.

Reports say the fatalities joined the procession to pray for “a better life.” To be fair to the Black Nazarene, they’re in a better place now.

This year’s Black Nazarene procession lasted 19 hours. Or as one MMDA constable put it, “Three diapers.”

Papal Visit
Some lawmakers have reportedly decided to skip the activities in next week’s Papal Visit for fear of being labeled “epal.” While others won’t attend for fear of spontaneous human combustion.

The MMDA has been preparing for the Papal Visit for months. Traffic enforcers are really excited to see the Pope whom they described as “inspiring.” In fact, the Pope and our MMDA personnel have some things in common: they live a simple life; they serve the people, and they’ll be wearing adult diapers this coming week. 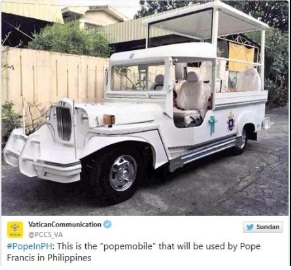 Saying the Pope may not be safe in the country, Valenzuela City First District Representative Sherwin Gatchalian has called on the PNP and the AFP to tighten security for this week’s Papal Visit. In response, the PNP and the AFP assured Gatchalian of their preparedness. In fact, they’re as always ready as Gatchalian’s press releases.

Shady
On Friday, President Aquino advised Filipino voters to reject shady politicians in 2016. This has prompted Nancy and Junjun Binay to call the President “racist.” 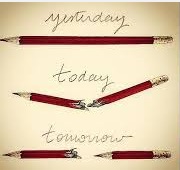 #JesuIsCharlie
The two main suspects in the massacre of 10 journalists and 2 cops in Paris have been killed by French police. Latest reports say Al-Qaeda’s branch in Yemen directed the attack against the Charlie Hebdo publication to “avenge the honor of the Prophet Muhammad.” Even Muhammad was like, “Sige! Namedrop pa!”

Pacman
Reports say Manny Pacquiao will fly to London this month to meet Prince Harry. It will be the first meeting between the two popular personalities. One is a rich, party animal who loves the company of gorgeous women, and the other one is Prince Harry.

“The contest has a very noble purpose, you know. The pageant is just another way of paying tribute to God’s unequalled aesthetic ability. Man is God’s masterpiece. So, I’m really excited,”
~Manny Pacquiao on having been named as one of the Miss Universe judges

Have a fun and safe weekend!