ASHLEY MADISON, the controversial website that encourages adultery has been launched in the Philippines. But Justice Secretary Leila Lima reminds the public, adultery is punishable under the Revised Penal Code. De Lima urges telecom companies to block the site – drawing criticisms from some netizens, Internet freedom advocates, and Bong Revilla. 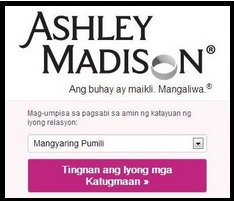 Ashley Madison, a controversial website that encourages adultery was recently launched in the Philippines. Joseph Estrada described it as “too late.”

A website that promotes adultery has been launched in the Philippines. Ashley Madison’s tagline is, “Ang buhay ay maikli. Mangaliwa.” Senator Enrile completely disagrees. With the ‘buhay’ part.

And the No. 1 rejected Ashley Madison tagline:

Adultery Map
China has released an “adultery map” which identified areas where the most number of government officials who are unfaithful to their partners are staying. In the Philippines, that area is called “session hall.”

No Bail
The Sandiganbayan has junked the petitions for temporary liberty filed by Janet Lim-Napoles, Bong Revilla, and his chief of staff Richard Cambe. According to the Sandiganbayan, “There exists strong evidence that accused Revilla, Cambe and Napoles, in conspiracy with one another, committed the capital offense of plunder.” Hence, no bail for Napoles, no bail for Revilla, no bail for Cambe. Sounds like gold, frankincense and myrrh for taxpayers. Merry Christmas!

Victims?
A third motorist has surfaced claiming he also had a bad encounter with mauled MMDA traffic enforcer Jorbe Adriatico. All three have denied rumors they were in cahoots with Cedric Lee.

It has been two years since Ka Freddie Aguilar married Jovie. Who could forget that moment? Ka Freddie was a dashing, proud groom while Jovie was a pretty flower girl.

Mass Extinction
Scientists say the planet is on the verge of its sixth mass extinction. With daily Twitter trending topics like #KathNielonGGV, #ChicserInvadesMetropolisAlabang #JaDineForever and #JoshAneRocks, maybe this generation deserves that.
——————————————————————————————————————–
“The only thing worse than the guilt was the fear of getting caught.”
~Elin Hilderbrand, A Summer Affair