AT LEAST 10 police officers were allegedly behind the EDSA-Mandaluyong robbery-abduction case last week. They have all been identified. Once arrested, they will be presented to the media, and then locked in a room with a drunk Billy Crawford.

Two of the cops who were involved in the EDSA robbery-abduction case were “repeat offenders.” The National Police Commission said SPO1 Ramil Hachero and PO2 Jonathan Rodriguez were slapped with the same charges in 2011. Apparently, they never learned. Hachero and Rodriguez are the Jinggoy Estrada of the police force.

Kickbacks
Former Makati vice mayor Nestor Mercado revealed that then city mayor Jejomar Binay received millions of pesos in kickbacks from several infrastructure projects. Which begs the question: how many bidders experienced being trapped in a Makati City elevator?

The Vice President is getting negative publicity of late. His spokesperson, Jonvic Remulla a.k.a. Mr. Cavite governor is blaming Binay’s enemies: Nestor Mercado, Alan Peter Cayetano, and the truth.

According to Nestor Mercado, former Makati City Mayor Jejomar Binay got  a “13 percent kickback” per project. Or in the words of Janet Lim-Napoles, “Cheap!”

Vice President Binay has a scheduled address next week. Jonvic Remulla says his boss will answer the allegations “punto por punto.” But he denies rumors the Vice President will end his speech with a music video. 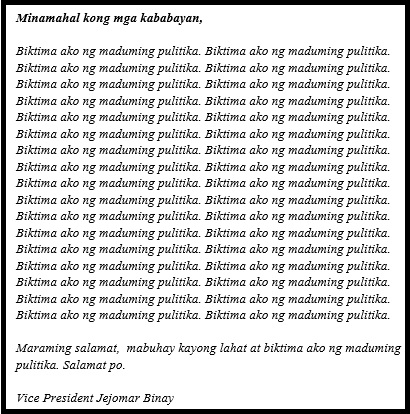 FIBA 2019
Bidding will start soon for the 2019 FIBA World Cup. Some countries have earlier expressed interest to make a bid. But they decided to back out this week after learning that they’ll be up against Hilmarc’s Construction Corp.

Warning
Citing security threats, the Chinese government advised its citizens “not to travel to the Philippines.” To which, Chinese nationals said, “Tanga! We’re already here.”

In a travel warning released the other day, China said, “the safety situation in the Philippines is deteriorating.” Of course, it would have been much safer here without those Chinese drug lords, Chinese traffickers, and defective Chinese products.

16-Digit Plate
A consumer welfare group and netizens blasted the Land Transportation Office for allowing hundreds of new taxi units [with pending franchise applications] to ply the streets of the metro using 16-digit plate numbers. When sought for reaction, the LTO gave 16 excuses.

The LTO allowed hundreds of new taxi units in Metro Manila to use 16-digit plate numbers. Or as abusive cab drivers would call it, “Awesome!”

Taxi units with 16-digit plates are now roaming the streets of Metro Manila. Thanks to the brilliant minds of LTO. When asked why sixteen numbers were used, the LTO replied, “26 letters are a bit long.” 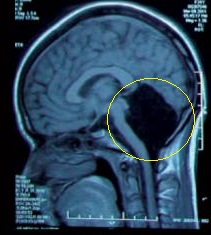 No Cerebellum
Doctors in China were startled when they discovered that a 24-year-old woman had been living without a portion of her brain. In the Philippines, we call that “LTO.”
———————————————————————–
“Politicians: Pinocchios with nose jobs.”
~Bauvard, The Darkness of Nature

One thought on “KICKBACKS, ROGUE COPS AND OTHER STORIES”