DID YOU hear the news about the Aquino administration’s net satisfaction rating and retired Major General Jovito Palparan? Both have fallen.

Public satisfaction with the administration hits a new all-time low: from +45 in March to +29 in June. A worried President Aquino called Budget Sec. Butch Abad and asked if he could consider resigning again.

Jovito Palparan, the retired major general who was labeled as “The Butcher” by leftists has been arrested in Manila. The lone informant will receive a bounty of 2 million pesos. The NBI has submitted his name to the President, the DOJ and the BIR. 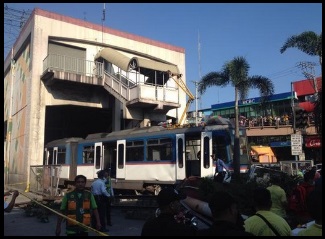 Derailed
An MRT train overshot the railway and slammed right into the metal barrier. Reports say at least 36 passengers got injured. President Aquino told CNN it’s fewer than that.

Here’s what happened: Train 1 couldn’t advance to its destination. It was defective. Train 2 stepped in and tried to help push Train 1. The journey started smoothly. However, something wrong happened along the way resulting in Train 1’s crash. Just to be clear, this is a description of the MRT accident last Wednesday not the Noy-Mar tandem in 2010.

For months, analysts have been saying that the MRT has serious problems and that certain officials are at fault. Now that an accident has happened, expect them to cover their tracks.

After the near-disaster at the MRT that injured dozens of people, the official Twitter account of DOTC tweeted about a “technical problem” and apologized for the “inconvenience.” The tweet was even more disastrous.

A wayward MRT train overshot the railway and crashed into the metal barrier. What a loco-motive!

The driver of the derailed MRT train is now being investigated. Apparently, he’s still in shock. While being interviewed, he lost his train of thought.

Binay and MVP
Reports say tycoon Manny Pangilinan is being considered by Vice President Binay as a potential running mate in 2016. Interesting. One is an intelligent, hardworking guy who has made billions from his empire and the other one is Manny Pangilinan.

Dream On
On Wednesday, suspected plunderer Jinggoy Estrada reiterated he wanted to become the running mate of Vice President Binay in 2016. Binay almost replied, “What part of ‘No!’ don’t you understand?”

Binay vs. Trillanes
Sen. Antonio Trillanes wants Vice President Binay to face a Senate inquiry on the alleged overpriced car park building in Makati City. An upset Sen. Nancy Binay said, “Hindi n’ya ho ka-level si Senator Trillanes. My father will not stoop down to his level.” When sought for reaction, Trillanes refused to stoop down to Nancy’s level.

Fat
The 8th National Nutrition Survey of the Food and Nutrition Research Institute showed 3 out of 10 Filipinos were overweight and obese. To those three, don’t be sad and don’t feel bad. Double chin up!

According to the same study, there are more fat Filipino women than men – which is understandable since they spend more time in the kitchen. #sexistjoke #sorry

One thought on “DERAILED”