IT’S BEEN raining all week. Some people say it’s heaven ‘crying.’ Maybe God is delivering his State of Heaven Address.

In his fifth State of the Nation Address, President Aquino became emotional. He said he’s done his part, and the people must continue what he has started. To be fair, Aquino’s integrity is beyond reproach. He’s a tough act to follow. His successor will have some big eyes to fill.

The President’s fifth SONA was long – one hour and 42 minutes to be exact according to reports. And he was emotional. But while the President was fighting tears, attendees were fighting sleep.

The Philippine Star published photos of unidentified guests who were obviously taking a nap while President Aquino was delivering his SONA last Monday. Rumors say those guests took it literally when the President said, “Hindi po masamang mangarap.”

President Aquino’s State of the Nation Address lasted 1 hour and 42 minutes. To the surprise of many Filipinos, there was no Arroyo-bashing, no tirades against the Supreme Court, and no FOI Bill.

Last Monday, all eyes were on President Aquino. Everyone was listening to him. He was the center of attention. That’s the reason why Kris Aquino cried. She realized that the world didn’t always revolve around her.

Gotcha
A 16 foot long crocodile was caught in Palawan last Monday, July 28. Locals were wondering what the crocodile was doing in Palawan when the second regular session of Congress just opened that day.

Graft
Former Pampanga governor and incumbent senator Lito Lapid has been charged with graft in connection with the purchase of overpriced liquid fertilizer. The actor has denied the allegation, saying he knows NOTHING about the scam. Among many other things.

In A Relationship
Sixty-five-year-old Dionisia Pacquiao has a love life. Apparently, that’s the reason why President Aquino cried during his State of the Nation Address.

Manny Pacquiao has revealed that Mommy Dionisia, 65 is in a relationship. Thank you Mommy Dionisia for giving hope to loveless Filipinos.

Approve!
According to Pulse Asia’s June 2014 Ulat ng Bayan survey, President Aquino’s approval rating dropped by 14 percentage points, from 70 percent to 56 percent. The survey’s margin of error was plus or minus Butch Abad.

Effective Leader
A stunning 88 percent of American Catholics think Pope Francis is doing a good job. Experts say, the Pope has a very high approval rating because he “leads with humility” – prompting the Supreme Court to tell President Aquino, “Now you know!”

Hunger
The latest SWS survey found that from 17.8 percent, the hunger rate is now 16.3 percent. That’s a difference of 1.5 percent. Those people are called “in denial.”

Video Scandal
TV host Paolo Bediones has filed a formal complaint against people who released and uploaded copies of his sex video. The PNP says the uploaded sex video is a vital piece of hard evidence that will definitely stand up in court.
——————————————————————————–
“One thing you can’t hide – is when you’re crippled inside.”
~John Lennon

Sound Bites
“I have a lot of social networking followers and everyone who says good things about him, they get a bonus because I reply to them. Siyempre iyong mga nega bina-block ko na lang. Pero konting-konti lang sila.”
~Kris Aquino on President Aquino’s supporters

Spam
Somebody sent me a message. I replied. 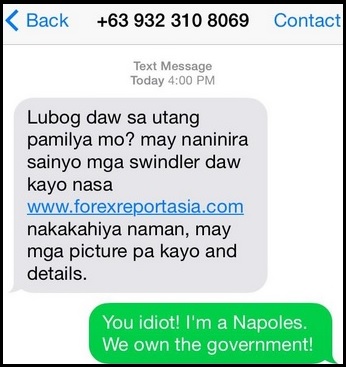