On her 85th birthday, Imelda Marcos prayed for strength to prolong her existence. In response, God gave her formalin.

According to Imelda, she had seen the “worst, worst, worst” in life. That’s what happens when you spend so much time in front of the mirror.

On her birthday, Imelda visited her constituents and handed them cash gifts. The people thanked her for giving them back their money.

To mark her 85th birthday, Imelda visited the refrigerated body of her husband, Ferdinand Marcos. When she planted a kiss on the glass coffin though, he gave her the cold shoulder.

On her birthday, former First Lady Imelda Marcos dramatically planted a kiss on her husband’s glass coffin. She then waxed poetic about the late dictator. 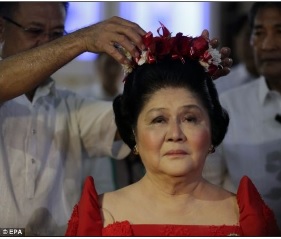 Imelda Marcos is confident of reclaiming Malacañang through her son Bongbong Marcos. If Marcos Jr. gets elected, his wife Louise will have too many shoes to fill.

Surrounded by her loyal supporters, Mrs. Marcos was crowned with flowers on her birthday. That tribute was moving. Her face wasn’t.

Hazing
The College of St. Benilde sophomore who was killed during a hazing ritual has been cremated. Meanwhile, a UP student – yet another hazing victim is reportedly in the ICU of St. Luke’s Medical Center right now. As expected, some fratmen are defending their “brods” saying hazing is a tradition that will eventually benefit the neophytes; they only want the best for them. In the words of palace spokesperson Edwin Lacierda, “good faith.”

DAP
The Supreme Court has ruled that the Aquino administration’s Disbursement Acceleration Program was unconstitutional and therefore, illegal. What did Malacanang say? “DAP was used to accelerate projects to help benefit the country and our countrymen. DAP was used for noble projects that benefited the people.” These were the exact words of palace spokesman Edwin Machiavelli.

Award!
Militant party-list group Gabriela gave Nora Aunor an”Artista ng Bayan” award for her “exemplary performance” in the 1976 film ‘Minsa’y Isang Gamu-gamo,’ a movie that was critical of American military presence in the Philippines. When told of the award, the Superstar instructed her secretary to draft a ‘Thank You’ note which she plans to give Gabriela in 2052.

Amid the National Artist debate, militant party-list group Gabriela on Friday gave Nora Aunor an award for her “exemplary performance” in the 1976 movie, ‘Minsa’y Isang Gamu-gamo.’ In other news, PETA has lambasted Steven Spielberg for depicting animal cruelty in his 1975 thriller ‘Jaws.’

Governor Vi
Some people are being mean to Batangas Governor Vilma Santos. They are mocking her grammatical lapses in a note sent to Kris Aquino. She misspelled the world ‘truly.’ Governor Vi has since apologized and admitted she was a former Starbucks barista.

Kris Aquino has also said sorry to Governor Vi. The TV host explained she posted the ‘Thank You’ note in ‘good faith.’ Kris is now the frontrunner for the post of palace spokesperson.

LaBeouf
A drunk Shia LaBeaouf was recently arrested for disrupting a Broadway musical. The good news is the 28-year-old actor is getting treatment for alcohol addiction. The bad news is he won’t win a National Artist award.
—————————————————————————-
“There are always rules to bend; Laws to break.”
~Abdelrahman Ashraf Abuzied

Soundbites
“I’ve said it before, I say it again now. It is stupid, katangahan and kabobohan to allow your body to be beaten to a pulp by so-called brothers who had you convinced they will care for you the rest of your life. Our young are falling prey to and are being devoured by their quest for power via a brotherhood that is fake.”
~Ma. Ceres P. Doyo, Frat torturers and their victims are weaklings

“Yes! I have cancer. Now I am entering another dimension of human life.”
~Sen. Miriam Defensor-Santiago

Naughty
He is a high-profile politician; married with children.
He projects a ‘loyal to my wife’ image.
He is not a womanizer.
Unimpeachable sources: “Well, he’s really not a womanizer ‘cause he prefers men.”
He would take his conquest abroad, far from the madding Filipino crowd.
And he’d call him ‘babe.’
Sweet.

HAVE A ROMANTIC WEEKEND!