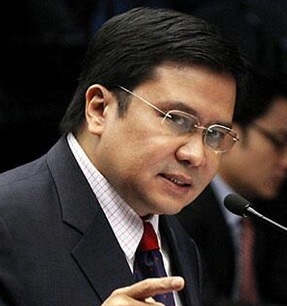 As expected, Jinggoy Estrada accused investigating agencies and the media of being “selective.” He then identified some politicians who allegedly misused their PDAF too – officially making him the kamikaze of pork barrel scam. If I’m going down, you’re coming with me.

Unlike his close friend Bong Revilla, Jinggoy Estrada neither sang nor played a music video during his privilege speech. He annoyed his critics by his mere presence.

Jinggoy Estrada’s lawyer says the prosecution won’t be able to show proof that he got P183 million in pork barrel kickbacks. In other news, probers can’t also show proof that MH370 crashed. But that doesn’t mean it didn’t happen.

Jinggoy’s wife Precy, his sister Jackie, and brother Jude were also present in the Senate to support him. Jinggoy expressed sadness that he and his wife wouldn’t be able to celebrate their next anniversary together. To which Jackie Ejercito– said, “Kami rin.” 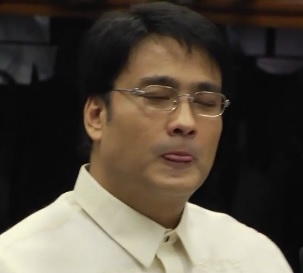 #BongPanis
After getting flak from netizens for his histrionics last Monday, Bong Revilla clarified that his music video was produced not for the offended netizens but for some 20 million people who voted him into office. In his defense, Revilla wasn’t insulting the intelligence of those 20 million Filipinos. He was assuming they didn’t have any.

To be fair to Bong Revilla, after his controversial speech, he did apologize to netizens. Here’s hoping that the next apology will be directed at taxpayers.

Shots Fired
In an apparent swipe at Bong Revilla, Jinggoy Estrada and probably ER Ejercito, President Aquino, in his Independence Day address, said Filipinos should vote for genuine leaders NOT actors, singers or dancers. In this day and age, how can you tell the difference?

Sex Video
Reports say Sandra Cam is threatening to release a purported sex video of Justice Sec. Leila De Lima. What is wrong with this Sandra Cam? Who gave her the idea that we wanted to see Leila De Lima in a sex video? 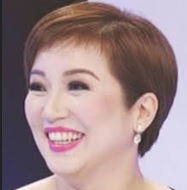 Kris, Again
While the whole nation was talking about Bong’s and Jinggoy’s rants, Kris Aquino took to Instagram to announce that she’s heartbroken. Nice try. Ok, back to the speeches…

PBB All Out
The MTRCB has ordered reality show ‘Pinoy Big Brother All In’ to issue an apology for its controversial ‘nude painting’ episode, earlier described by Sen. Pia Cayetano as an “assault to the dignity of women” and by Sen. Nancy Binay as an “irresponsible and insensitive act.” On Wednesday night, the producers apologized but insisted that the ‘nude painting’ task was just a test of convictions, values, and ratings.

‘Pinoy Big Brother’ has apologized for its ‘nude painting’ episode. The show should also apologize for triggering its viewers’ inner jejemon.

“I reviewed the video of the speech on YouTube, and read the text twice to get a sense of where it was going. But I could not comprehend the speech’s basic thrust. Its tone was alternately accusatory and conciliatory. It sounded serious in some parts, struggling to rise above the shallow emotions, the clichés, and the air of righteousness that pervaded it. But in the end it drowned in its own pettiness, accompanied by the funereal strains of a maudlin farewell song.”
~Prof. Randy David, “The unbearable privilege of pettiness”

One thought on “OF PRIVILEGE SPEECHES, SEX VIDEOS AND HEARTBREAK”