MY FELLOW Batangueño, Ralph Recto, who has never spoken a single word against the pork barrel scam since it was exposed last year, is in the news now. After he was mentioned in the Benhur Luy files, an angry Recto broke his silence on the PDAF scam saying, all whistleblowers should be jailed. “They should PAY for what they did,” an angry Recto said, “plus 12 percent.”

Ralph Recto has never spoken about the pork barrel scam since it was exposed last year. When he finally did last week, he trained his guns on PDAF scam whistleblowers like Benhur Luy and Merlina Suñas. He said, “Lahat ng whistleblower na may kinalaman d’yan dapat makulong!” And Janet Napoles was like, “Thanks for the support!”

Veep Veep
Vice President Jejomar Binay reveals he has yet to choose his bet for VP in 2016. Everyone, he says, has a chance. In fact, despite a plunder case against Jinggoy Estrada, the senator can still be his running inmate.

Napoles
According to the Philippine National Police, termites and cockroaches have invaded Janet Lim-Napoles’s bungalow-type detention facility in Fort Sto. Domingo. But the PNP did not get rid of the insects since the detention facility was purposely constructed for living things like them. You know. Pests.

Just Married
Vice President Binay was one of the principal sponsors in the wedding of Atty. Levito Baligod, the former lawyer of PDAF scam whistleblowers Benhur Luy and Merlina Suñas. Congratulations… Jinggoy, Bong, and Enrile!

Exactly a year before joining the Aquino administration, Butch Abad reported an income of P16,000 for 2009. That’s 16,000 pesos for one year! When a group of kasambahay heard this, they died. Twice.

Income Tax
At least three bills seeking to lower the income tax rate have been filed in Congress. You know what that means? Butch Abad need not pay anything.

No Smoking
World No Tobacco Day is observed every May 31. To draw attention to the negative effects of smoking, the Department of Health conducted public forums on lung cancer, respiratory diseases, aging, and President Aquino’s lovelife.

According to the Department of Health, around 240 Filipinos die every day due to tobacco-related illnesses. Those who survive either go bald or remain single at 54. [You’ve been warned.]

May 31 is World No Tobacco Day – or as President Aquino would say, “Whatever!”

ER
After Erap’s visit in the Laguna capitol, his nephew ER Ejercito stepped down as governor. When will Erap pay a visit to Jinggoy in the Senate?

Cash-Strapped
According to a recent SWS study, 9 in 10 Filipinos experienced financial shortage in the last 12 months. The other one was a lawmaker. 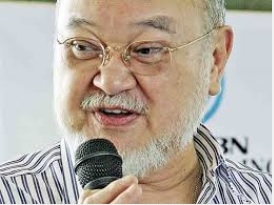 Maligned?
Former TESDA director general Augusto Syjuco Jr. who is facing six graft charges before the Sandiganbayan, filed a libel case against President Aquino for virtually calling him a “thief” in his State of the Nation Address last year. Syjuco said the President’s “personal attacks” tarnished his reputation. We tried to get the side of Syjuco’s “reputation,” but it was nowhere to be found.

Sound Bites
“That Napoles thinks the disinformation she is purveying qualifies her to be a state’s witness is an insult and an outrage. She has the gall to describe herself as a victim of the same political culture she is accused of profiting billions of pesos from; in truth, her affidavit is best described, as many have already described it, not as a tell-all but a blame-all. It would be sheer folly to take her at her word.”
~Philippine Daily Inquirer, Editorial

We have a new poll. The other day, this image of a Hong Kong textbook page went viral. Do you find this insulting or offensive?

Have a great month of June!

One thought on “OF TERMITES, COCKROACHES, AND HYPOCRITES”