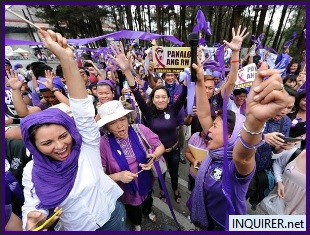 THE SUPREME COURT upheld the constitutionality of the Reproductive Health Law. The TRO against the law will soon be lifted – paving the way for its full implementation. Or as Kit Tatad would call it, ‘genocide.’

Interviewed by ABS-CBN News, Archbishop Emeritus Oscar Cruz said Supreme Court justices were pressured by Malacañang when they voted on the constitutionality of the RH Law. And even God was like, “Move on, move on din ‘pag may time.”

Archbishop Oscar Cruz told ABC-SCBN News that the Supreme Court was “under Malacañang’s clutches.” To which, French writer Voltaire reacted, “I may not agree with what you say but I’ll defend to the death your right to be so bitter.”

A Social Weather Stations survey showed almost 80 percent of adult Filipinos believed in the constitutionality of the RH Law. The rest needed enlightenment.

Pedophile Alert
The Italian ambassador to Turkmenistan who’s vacationing in the Philippines was arrested in Biñan, Laguna with three boys aged 9, 10 and 12 for suspected sex trafficking. The diplomat identified as Daniele Bosio tried to justify his being sweet to the boys by claiming to be a priest.

Biopsy
Suspected pork barrel scam mastermind Janet Lim-Napoles underwent a biopsy procedure at the Ospital ng Makati Tuesday night. This is to determine whether the cyst in her uterus is benign, malignant, or karmic.

Winner
A lone bettor from Makati City won the 249 million-peso Grand Lotto jackpot last Monday. He didn’t have to work for it. He was just really lucky. I mean, that’s more than 240 million pesos! Now he knows how it feels to be like Bong Revilla.

Caught!
In Uganda, a man-eating one-ton crocodile has finally been caught. During interrogation, the crocodile denied allegations it consulted former senator Ping Lacson on how to evade capture.

No Kidding
In Pakistan… a 9-month-old boy was reportedly charged with frustrated murder along with his father and grandfather for allegedly throwing stones at policemen during a protest rally. He was brought to the police station and was even fingerprinted. The cops refused to release the baby despite getting a call from a high-ranking official of the Liberal Party who tried to block the arrest.

Reports say the Pakistani cop who booked the 9-month-old boy has since been suspended for the outrageous arrest. He also got a dressing down from the Pakistani president who called his action a disservice to the PNP (Pakistani National Police).

Wow Mali!
A Cavite-based tabloid reporter was gunned down in her home last Sunday. On Tuesday, Tanza, Cavite police arrested a suspect. However, relatives of the victim said the cops nabbed the wrong guy. The sloppy job was blamed on the Tanza police chief who was rumored to be half-Filipino, half-Pakistani.

THIS is turning out to be a crazy week. You have a man-eating croc in Uganda; a 9-month-old boy charged with frustrated murder in Pakistan; a wrongful arrest in Cavite, and then there’s the Kris-Herbert romance. Crazy! 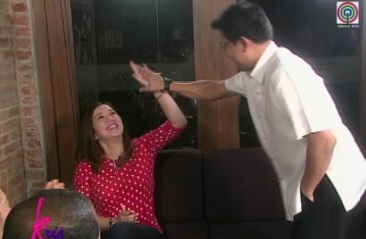 Krissy and Herbert
TV host Kris Aquino has admitted that she is in a relationship. Take that Mr. President!

In a statement she, herself read on live TV, Kris Aquino said she and Herbert were allowing themselves “to have a chance at forever by keeping quiet and private.” But not before announcing their relationship to the whole wide world. Good start!

An inspired Kris Aquino says there is somebody in her life “who is special.” Herbert Bautista is now the second happiest person on Earth… next only to James Yap.

Kris Aquino’s past relationships include Alvin Patrimonio, Phillip Salvador, Joey Marquez, and James Yap. Rumors say those four have something in common. But to be fair to the Quezon City mayor, he’s a performer.

When Kris Aquino announced Monday night that she and Quezon City Mayor Herbert Bautista were ‘partners,’ a political observer sent me this text message: “Sina Kris and Herbert na?! Ha-ha! Ang dami kong tawa!” I asked, “How many?” He replied, “More or less 2016!”

Pic of the Week
His Grace, King Joffrey Baratheon has a message to Filipinos:

“One of the truly bad effects of religion is that it teaches us that it is a virtue to be satisfied with not understanding.”
~ Richard Dawkins

Sound Bites
“It’s a triumph of reason over superstition.”
~Sen. Miriam Defensor-Santiago reacting to the SC’s decision on the RH Law

“Kris is too good looking to be dating Herbert. That’s all I have to say about it.”
~Former Makati representative Teddyboy Locsin

Elsewhere
Let Enrile, Estrada, Revilla go to jail
By Dr. Sylvia Estrada-Claudio:
“Estrada calls it an April fools’ joke. I call it, sexy. So sexy that Justice Secretary de Lima and Ombudsman Carpio Morales should be receiving marriage proposals. It’s not a joke, Jinggoy, honey. It’s a blockbuster. It’s so sweet we are waiting for the DVD version. And we are so very enamored of this production we can’t wait for the sequels. I do hope the producers give in to what the audience wants.”

[Photos: Thanks to Inquirer.net, UPI and  KrisTV ]