DAYS AFTER it was reported that two congressmen filed a bill seeking to penalize people who wouldn’t fall in line, another solon – Rene Relampagos of Bohol – filed a bill that seeks to declare adobo as “national food.” A majority of congressmen are expected to express support for the bill considering their undying love for pork.

In 2011, Congressman Rene Relampagos of Bohol (s’ya ulit!) proposed to change the name of EDSA and call it Cory Aquino Avenue. Next week Relampagos is filing a bill that seeks to declare Kris Aquino as our national pastime.

Pampanga Representative (also, Rain or Shine coach) Yeng Guiao has filed a bill that seeks to rename Clark International Airport and call it Corazon C. Aquino International Authority. When a group of solons opposed the proposed measure, Yeng Guiao walked out of the plenary.

Pasay City representative Emi Calixto-Rubiano has filed a bill that would require cities and municipalities to create a park for “bicyclists.” The bill is being lauded by LGBT groups.

Binay’s Party
Vice President Jejomar Binay has bolted the PDP-Laban and formed a new party. Reports say various political groups have expressed interest to join forces with the new political party – which was described by Mayor Junjun Binay as an umbrella organization.

Powerless
Fifteen months after Typhoon Pablo hit Davao Oriental, many barangays are still without power. During his recent visit to the province, President Aquino was shocked to learn about the situation. To be fair, the residents were also shocked to learn that the national government cared about them.

March
In the Philippines, March is Fire Prevention Month. It’s the time of the year when fire incidents are not prevented.

Convicted
Just last week, the Sandiganbayan convicted former Oriental Mindoro governor Rodolfo Valencia of graft and corruption and sentenced him to a maximum of 10 years in prison. The case against Valencia was resolved after 21 long years. Or as Tanda, Pogi and Sexy would say, “Nice!”

Ducut
President Aquino says removing the very controversial Zenaida Ducut from her post as chair of the Energy Regulatory Commission must have a justifiable reason. The President says there has to be a process. And former PAGASA chief Prisco Nilo was like, “Yeah right!” 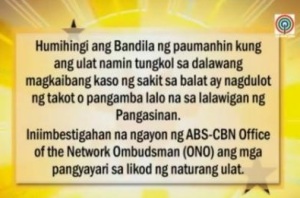 Apology
Last Thursday, ABS-CBN’s Bandila apologized for Jasmin Romero’s report on a “flesh-eating” “mysterious disease” in Pangasinan that turned out to be a hoax. ABS-CBN says the Office of the Network Ombudsman is investigating what happened. If Jasmin gets fired, TV5 is reportedly willing to give her a job: as host of ‘Wow Mali.’

Cannons
Reports say Chinese coast guard ships used water cannons to scare away Filipino fishermen from the disputed Panatag Shoal two weeks ago. Local fishermen vow to be more courageous next time. If they encounter those Chinese vessels again, they’ll scare them away by showing Bandila’s report on the flesh-eating disease.

Honest
Genelito Macaraig, a cab driver returned a belt bag containing 1,000 Australian dollars and other valuables left by a passenger in his cab. This guy is honest. He’ll never be a congressman.

New Planets
Astronomers recently announced the discovery of some 715 new planets outside our Solar System. I think that’s good news. Those 715 planets are more than enough to accommodate our 318 lawmakers.

Jared Leto won the Best Supporting Oscar for ‘Dallas Buyers Club.’ He had one of the best speeches of the night. He thanked his mother, and dedicated his award to people with HIV/AIDS. He also made a shout out to people in places that are in chaos right now like Ukraine, Venezuela, and the Philippine Senate.

Matthew McConaughey won Best Actor for Dallas Buyers Club… totally shattering the hopes of E.R. Ejercito to be recognized for his performance in ‘Boy Golden.’

The Best Picture winner was 12 Years A Slave. In the movie, a free man was enslaved for 12 years – which was about the same length of time allotted for this year’s Oscars telecast. 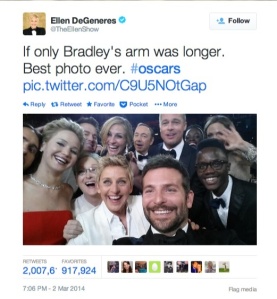 Host Ellen DeGeneres’s group selfie became the most retweeted selfie ever. In case you didn’t notice, Chavit Singson was there! Look again.

Wally
What he experienced was tough but he managed to pull through. On Startalk, comedian Wally Bayola finally spoke about his controversial video with a dancer. He’s strong despite the sex scandal. In fact, he’s on top of the situation.
———————————————————–
“I have come to the conclusion that one useless man is a disgrace, that two become a lawfirm, and that three or more become a congress.”
~ John Adams

Your Turn
Some people are asking if they could contribute their own jokes here. I think that’s cool. Just make sure the jokes you’ll be sending are original.  I’ll be selecting the best ones and publish them here. Email me at yourturn2014@gmail.com. Include your name or alias (how you wanna be credited). I’ll be waiting.

Elsewhere
Ellen Tordesillas – Mar-Chiz, Binay-Meloto, Cayetano-Trillanes
“The intriguing thing about this Binay-Meloto team up is that it is brokered by a presidential relative.”

4 thoughts on “ADOBO, ATE VI, THE OSCARS, AND OTHER STORIES”