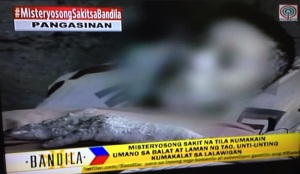 When Bandila aired the controversial report last Monday, the news program even used the hashtag #MisteryosongSakitSaBandila. The “misteryosong sakit” was later identified as sloppy reporting.

Seriously though, I feel bad for reporter Jasmin Romero. Rumors say irate bosses had her ‘quarantined.’

When the Health Department confirmed that Bandila’s controversial report on a “mysterious flesh-eating disease” in Pangasinan was a hoax, the news program made just a short report on the same issue the next day. It then quickly segued to an item about Meralco. Kuryente pa rin.

On Tuesday, Bandila anchor Julius Babao said it was not the program’s intention to scare the public. And self-proclaimed prophet Sadhu was like, “So, fault ko? Kasalanan kong idinawit n’yo ako sa report n’yo?! Gano’n?”

ABS-CBN News is in hot water these days. Or as Arnold Clavio would say, “Your turn!”

According to an Inquirer report, ABS-CBN News has removed the video of the original Bandila story from its website. But it’s too late! The false report on the flesh-eating disease has gone bacterial. I mean, viral. 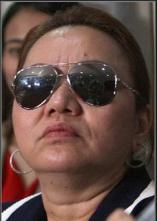 Transvaginal Ultrasound
Suspected pork barrel queen Janet Napoles had a check up the other day. According to doctors, Napoles has a cyst in her uterus. Bandila is verifying rumors Napoles’s illness was predicted by an Indian prophet.

Reporters went to Camp Crame Wednesday to cover the medical check up of Janet Napoles. Some of them started to panic when ABS-CBN reporter Jasmine Romero arrived wearing a protective gear, goggles and face mask.

Janet Napoles underwent a medical check up Wednesday. Doctors did not find any life-threatening disease. This was contrary to Napoleses’s lawyer’s claims she probably had ovarian tumor or worse, cancer. It was an exaggeration. The lawyer has denied reports he was a former ABS-CBN News reporter.

In Ukraine…
Disgraced leader Viktor Yanukovych who was ousted following days of street protests in Kiev insists he did not quit his post. Yanukovych has left the presidential palace in the capital and returned to his home in Polk Street.

In Delaware, USA…
A woman was charged for grabbing her boyfriend’s scrotum and “squeezing as hard as she could” during a heated argument. The woman was identified as Kris Aquino.

Bawal Sumingit
Ako Bicol Party-list Representatives Christopher Co and Rodel Batocabe have filed a bill that seeks to penalize people who do not fall in line. #PrayForCoAndBatocabe #PrayForBicol

Two congressmen have filed a bill that seeks to penalize people who refuse to fall in line. When are we going to penalize congressmen who file unnecessary bills?
——————————————————————
“People should get their information from the source with facts before sharing it. Rumors can be lots of different opinions, based on what other people think. This is where lies begin to build and develop into things that are harmful to others.”
~Ellen J. Barrier

“It shows here the role of media; that responsible journalism is important.”
~ Health Undersecretary Teodoro Herbosa