SUSPECTED SMUGGLER Davidson Bangayan a.k.a. David Tan appeared before the Senate Monday. He was grilled by Senator Enrile on the issue of smuggling. As expected, he was no match for the veteran politician. Moral of the story: Don’t argue with someone who’s more knowledgable about the subject.

During Monday’s Senate hearing, tough-talking Mayor Rodrigo Duterte said he would “gladly kill” alleged rice smuggler David Bangayan alias David Tan if the latter would be caught smuggling rice in Davao. Sen. Cynthia Villar defended Duterte and said, “I always take Mayor Duterte’s word figuratively. Just like when he gets angry with criminals, he tells them he will kill them. But he never killed them.” And Duterte was like, “Ikaw ang nagsabi n’yan!”

Honest
A baggage porter returned some 210,000 pesos left by an OFW in a baggage cart at NAIA Terminal 1. Despite his financial needs, baggage porter Jony Villon said he never thought of stealing someone else’s money. To which, lawmakers said, “Thanks for the advice!”

Innocent?
In its notices of disallowance, the Commission on Audit asked Senators Juan Ponce Enrile, Jinggoy Estrada, Gregorio Honasan, and Bong Revilla to return millions of pesos from their pork barrel funds. It’s not theirs! Enrile and Jinggoy refused saying they’re not baggage porters.

Cheers!
According to a recent study conducted by research firm Euromonitor, Filipinos are the third heaviest drinkers in the world. The study found that Filipinos consume an average of 5.4 shots of any spirit per week including whiskey, vodka, tequila, brandy, rum, gin, and lambanog. The survey was conducted at the Office of the Executive Secretary. 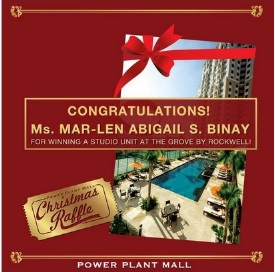 Lucky
Makati Rep. Abigail Binay won a condo unit in a Christmas raffle sponsored by the Lopezes’ Powerplant Mall and Rockwell Land. This has prompted the camp of Mar Roxas to conduct a loyalty check.

The winner of a posh condo unit in Powerplant Mall’s Christmas raffle was Makati Rep. Abigail Binay. According to Powerplant Mall, for every P2,500 receipt, a shopper was entitled to one raffle ticket. It was an easy victory for Binay. She was virtually unopposed.

Sen. Nancy Binay defended her younger sister Abby from critics saying she won fair and square. Nancy then congratulated Abby for being “really lucky that you won.” Abby responded, “You too.”

Happy Birthday!
On Feb. 4, Facebook turned 10 years old. Or as some Catholic priests would say, “Too old!”

From liking pictures and commenting on posts to changing profile photos, Facebook keeps monitoring and telling everyone your every move. I therefore conclude that Facebook is female.

Have you tried viewing that personal movie created by Facebook for its users in celebration of its 10th birthday? When you click facebook.com/lookback, it will show some of your life’s ‘highlights.’ This morning, Senator Enrile got really sentimental when Facebook showed some of his photos taken during the Renaissance.

Coldest
In 2016, a NASA experiment will create the coldest place in the known universe. Scientists will name it ‘Noynoy’s heart.’
————————————————
“The best luck always happens to people who don’t need it.”
~ Robert Penn Warren, All the King’s Men

Sound Bites
“If this guy would go to Davao and start to unload, pag nakita ko siya in the commission of a crime, I will gladly kill him. Siyempre hihintayin ko siyang lumabas. Pag lumaban ito and he puts up a good fight, I will not hesitate. I will do it for my country.”
~Davao City Mayor Rodrigo Duterte on alleged rice smuggler David Tan/Davidson Bangayan

2 thoughts on “JUST GOT LUCKY”