ARCTIC-LIKE conditions enveloped parts of the United States and Canada. Experts say some 187 million people are feeling the effects of the extreme cold weather. In the Philippines, Senator Enrile felt nostalgic. He had a similar experience during the Ice Age. 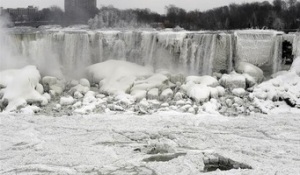 Due to the extreme weather condition, parts of the famed Niagara Falls have become frozen. Manny Pacquiao can relate.

Because of the so-called polar vortex, the US side of the Niagara Falls has become frozen. It ain’t moving. It’s like Edsa but everyday.

Across North America, millions of people experience record-breaking low temperatures. Out there, it’s freezing like hell! I mean, it’s freezing.

Black Nazarene
On the feast day of the Black Nazarene, journalist Raissa Robles wrote a piece on the reportedly miraculous statue and suspected pork barrel scam mastermind Janet Lim-Napoles. Robles said the statue was “regularly and personally brought” to the Napoles mansion “by its priest-custodian, Monsignor Josefino Ramirez.” Apparently, Benhur Luy was not the first victim of ‘kidnapping.’

The annual procession of the Black Nazarene is held in Manila. There are several ways to get near the sculpture. You can push, you can shove. Or you can donate millions of pesos in stolen public funds. 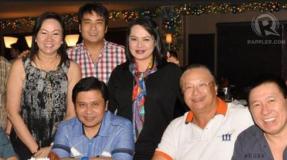 Jinggoy
Accused last year of pocketing millions of pesos in pork barrel funds, Jinggoy Estrada is in the news again. Sen. Antonio Trillanes has slammed Jinggoy for realigning 100 million pesos of his ‘pork’ to the City of Manila where his father is the incumbent mayor. But Jinggoy insists he sees nothing wrong with that. In totally unrelated news, Cord Marine Epoxy is reportedly eyeing Jinggoy as endorser. You know, ‘Sintigas ng bakal, sintibay ng bato, sintatag ng isang blokeng semento.’

Jinggoy Estrada defended his decision to allot 100 million pesos of pork barrel funds to the City of Manila. The actor turned politician said, “That was my own initiative.” He added, “Hindi nga alam ng tatay ko ‘yan eh.” Among many other things.

Bong
On Friday, January 10, in front his friends in the entertainment press, Bong Revilla said, “Sinurrender ko na sa Lord ang lahat.” Sought for reaction, the Lord said, “I have no freakin’ idea what he’s freakin’ talking about.”

After being tagged in the multibillion-peso pork barrel scam, Bong Revilla announced he’ll deliver a privilege speech soon. I sincerely appreciate the senator’s concern for his countrymen. After the massive destruction caused by the Bohol quake and super typhoon Yolanda, Filipinos badly need something to laugh about.

Worst
According to a US-based financial media company, NAIA is the world’s 8th worst airport. Which raises the question, “Is this even news?” [Tell us something we don’t know.]

Not Interested
Batangas Governor Vilma Santos told ANC she’s not dreaming of the presidency. To which the ‘presidency’ replied, “Thanks!”

Peek of the Week
This devotee puts the ‘ass’ in passion. Mabuhay ka!

“So? So what? Is there anything wrong?”
~Jinggoy Estrada on realigning P100M of pork barrel funds to Manila

“For instance, we are now unashamed to steal when we are supposed to be ashamed of it. Ang pagnanakaw hindi na ikinahihiya ngayon. ‘Yon ang dapat ikahiya!”
~Archbishop Luis Antonio Tagle in his homily, Feast of the Black Nazarene