ANOTHER ROBBERY took place at a branch of SM Supermalls. This time, the heist happened at SM North Edsa on Sunday night. Apparently, the robbers were able to sneak past mall security because they didn’t look like robbers at all. According to witnesses, they looked like lawmakers.

Police say the suspects were so daring they did not even try to cover their faces as they pulled of the robbery. Who the hell did they think they were… congressmen?

According to reports, a concerned President Aquino decided to check on SM North Edsa just a couple of hours after the robbery. When is he going to check on the Senate and the Lower House?

Police claim the robbers were captured on CCTV. One robber was old, one was handsome, and another was sexy. 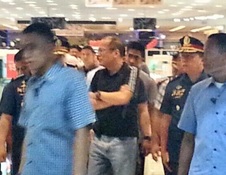 Last January, there was a similar incident at SM Megamall. The robbers were also identified as members of the so-called Martilyo Gang. HisThory repeats itself.

Secretary Roxas said some P5 million worth of jewelry were stolen from SM City North Edsa. Janet Napoles allegedly stole some P10 billion in pork barrel funds. Martilyo Gang members are confident they would be given the chance to surrender to President Aquino in Malacañang too.

Skyfall
A Don Mariano passenger bus fell off the Skyway on South Luzon Expressway around 5 am, Dec. 16. Probers put the initial death toll at 22. President Aquino believes the figure is too high.

A revised figure was released Monday evening. Reports said the accident killed 18 people only. The cop who gave the initial death toll was lucky Mar Roxas didn’t order him relieved.

Discovery
Scientists recently discovered fossil remains of a 4.4-million-year-old horse. Apparently, it was the same horse Senator Enrile used to ride back in his youth.

Executed
Eccentric North Korean leader Kim Jong-Un has had his once powerful uncle executed for alleged corruption – prompting Peping Cojuangco to ask his nephew, Noynoy Aquino, “You’re not eccentric, right?”
————————————————-
“Man is not, by nature, deserving of all that he wants. When we think that we are automatically entitled to something, that is when we start walking all over others to get it.”
~ Criss Jami

Have a fun and safe week!