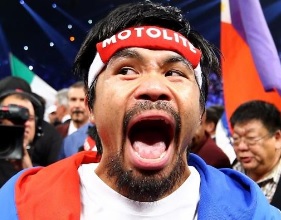 CONGRATULATIONS Manny Pacquiao! You were impressive in that sparring session.

Boxing analysts lauded Manny Pacquiao for his speed. Some typhoon victims wished he was the government.

Did you guys watch the fight? Manny Pacquiao is back! Unfortunately, so is Chavit Singson.

If you looked closely at Manny Pacquiao’s blue trunks, you would‘ve noticed some prominent labels such as No Fear, LBC, Café Puro, Motolite, Ricoa, and Office of the Vice President.

Brandon Rios was simply outboxed. Of the 502 punches thrown, Rios landed 138. But President Aquino told Christiane Amanpour the figure was “too much.”

According to CompuBox, Brandon Rios landed 138 punches. He’s one lucky guy. In the Philippines, people could only dream of punching a lawmaker.

An irritated Rios replied, “You should have visited Macau and watched the fight yourself. I’m sure your husband has the means to arrange a flight.”

Mommy Dionisia was at ring side during the Pacquiao-Rios fight in Macau. It was a double victory for Pacman and Pacmom. Aling Dionisia was awarded Best in National Costume.

Jinkee Pacquiao is three months pregnant. According to Manny Pacquiao, God told him (via a dream) he’s going to have a baby boy. Sought for reaction, God said, “Wala akong alam d’yan!”

Sound Bites
“This isn’t about my comeback. My victory is a symbol of my people’s comeback from a natural disaster, a national tragedy. It’s really important to bring honor to my country with this win.”
~ Manny Pacquiao

Have a safe week ahead! Welcome back Pacquiao!