.
HERE IS THE complete list of Janet Napoles’s shocking revelations on the pork barrel scam as told before the Senate Blue Ribbon Committee in a hearing held Thursday, November 7, 2013.
.

Grilled Pork
JANET LIM-NAPOLES appeared before the Senate blue ribbon committee Thursday, Nov. 7. Before the actual hearing started, Napoles took her oath. She vowed to “tell the truth, the whole truth, and nothing but the truth so help me God.” To which, God said, “Ulol!”

Janet Napoles absolved lawmakers of wrongdoing. She claimed she knew nothing about the pork barrel scandal and even declared, “Wala namang scam.” She also denied that they’re rich. Just the perfect material for the next episode of ‘Kap’s Amazing Stories.’

Denying reports they’re rich, she described their status as “sakto lang.” If “sakto lang” means owning 30 cars, 28 houses, 200 Heritage Park lots, and 107 bank accounts under her name, then the rest of us are what? Echinoderms? Parameciums? Dinoflagellates?

Throughout the hearing, Janet Lim-Napoles was wearing a bullet-proof vest. For someone whose skin was beyond thick, was that even needed?

As soon as Sen. Miriam Defensor-Santiago was acknowledged by committee chair TG Guingona, the feisty lawmaker told Janet Napoles, “There you are. Let me take a good look at you.” Napoles felt really uncomfortable. She didn’t expect Senator Miriam to be stricter than the security in Malacañang.

The hearing lasted six hours but Janet Lim-Napoles failed to give new or substantial information on the pork barrel mess. Arnold Clavio was extremely disappointed.

Sen. Allan Peter Cayetano asked Janet Napoles, “Did you ever consider a career in government?” And Napoles was like, “The f*ck are you talking about?!? I run the government!” 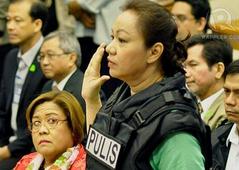