IT WAS ONE of those classics you’ll remember for a long time. Both sides refused to yield. Both sides believed they were so much better than the other. Both sides wanted to desperately win. And both sides vowed to beat each other in the future. It was like watching Jejomar Binay and Mar Roxas. 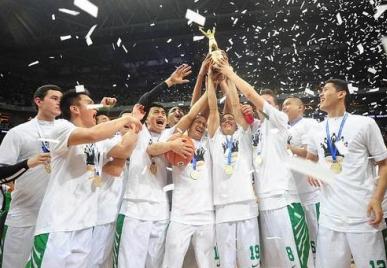 The De La Salle Green Archers defeated the UST Growling Tigers in a do-or-die game to win the men’s basketball title in Season 76 of the UAAP. La Salle outscored UST, 71-69 to win the championship. It was a tough loss for Thomasians and an even tougher loss for Ateneans.

Sources say the Green Archers will definitely receive bonuses. Those boys worked hard for it. They so deserve it. Let them experience how it feels to be like SSS Board Members.

The management of La Salle was quick to deny though that the bonuses would come from Butch Abad’s DAP.

Jeron Teng topscored for the Archers with 25; Almond Vosotros had 16; Perkins, 13, and Van Opstal, 11. Much to the surprise of basketball analysts, Nancy Binay also came in strong and tallied 10 points, 6 rebounds, and 3 assists.

During the UAAP finals series, the Teng brothers’ parents were “separated.” Alvin Teng was with the La Salle crowd while Susan Teng sat in the UST gallery. Despite the distance, they still talked and communicated. To which, Enrile and Gigi Reyes said, “Gaya-gaya!”

Personally, I felt bad for the Growling Tigers’ Aljon Mariano who was pilloried online for his miscues. He missed a shot at the end of regulation and turned the ball over in one crucial play in overtime. He was also 0 out of 8 from the field. It seemed like everything he did was wrong… prompting some people to ask if he’s a member of the Senate’s minority bloc.

The UAAP finals series is over. Give Aljon Mariano a break. You can now go back to hating Napoles, Revilla, Enrile, Jinggoy, Abad et al.

While Game 3 was being played, it was raining outside. The roads were wet. The only thing much wetter was Terrence Romeo’s hands. 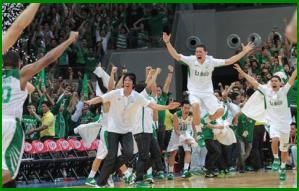 When the final buzzer sounded, every member of the La Salle crowd inside the MOA Arena was frenetically jumping up and down… except those in the Upper Box and Gen Ad seats. #Afraid!

The do-or-die game between La Salle and UST was a gut-wrenching thriller for basketball fans. The only thing I hated about it was…. UP’s not playing.

DLSU has emerged as the winner. But they have to watch out as the Comelec has started looking into reports La Salle overspent during its title campaign.

To La Sallians, congratulations! To Thomasians, I want you to be happy so here’s a joke: Malacañang’s Edwin Lacierda says the pork barrel system has been abolished.

Not funny? Here’s an even bigger joke: Reports say Bong Revilla will file countercharges against pork scam whistleblowers. There.

BREAKING: As winner, the De La Salle Green Archers will have to stay in London for a year with Julia Morley. Basketball with a purpose.
——————————————————–
“Win without boasting. Lose without excuse.”
~Albert Payson Terhune