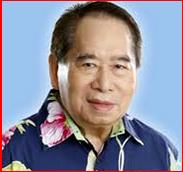 All is not lost though. It’s only the 16th Congress. Maybe she’ll make the list after the 20th Congress.

Sen. Miriam Defensor-Santiago has filed a resolution that seeks the abolition of the pork barrel. In other news, an SWS survey conducted in both Houses of Congress this morning showed Santiago was the most hated lawmaker.

Sen. Miriam Defensor-Santiago is seeking a gradual abolition of the pork barrel. Lawmakers are advised to read more about withdrawal syndrome.

Pride
Remember Janet Lim-Napoles’ daughter Jeane who flaunted photos of her Porsche, LVs, YSLs, Chanels, Louboutins and Celines in social media? Lawyer Lorna Kapunan says everyone should be proud of people like Jeane. I don’t think everyone will be proud of lawyers like Kapunan.

Tax Evaders
The Bureau of Internal Revenue says 90 percent of Filipino professionals are not paying the correct taxes. But that’s because 90 percent of BIR people are in cahoots with them!

Full Moon
A recent study revealed people find it really hard to sleep when there’s a full moon – And even much harder when his or her name is being linked to the pork barrel scam.

Genius
Anala Beevers, a four-year-old toddler from New Orleans is the newest member of Mensa, an international organization of intellectually-gifted people. She was only four months old when she learned the alphabet. Today, she would often correct her parents’ grammar. Anala’s dad says, “She needs a reality show.” Anala’s a genius but her father’s an idiot!

La Greta
Reports say actress Gretchen Barretto is not shocked by the reported rift between her sister Claudine and Raymart Santiago. And even if she’s shocked, it will be very hard to tell.
———————————————————
“Don’t handicap your children by making their lives easy.”
~ Robert A. Heinlein on luxury

Sound Bites
“We are legislators not public works contractors.”
~Sen. Miriam Defensor-Santiago to fellow lawmakers on the issue of pork barrel spending

“I was not shocked. With many things happening, I am only concerned with my self-preservation.”
~Gretchen Barretto on the rift between Claudine and Raymart

Have a peaceful, productive and happy month of August!