THE TRANSMISSION of election returns has slowed down. To give you an idea of how slow it has become, when the counting started, Chairman Brillantes didn’t have a single strand of white hair.

And when the counting started, the Philippines and Taiwan were still friends! 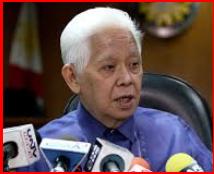 Prediction
Last month, Comelec Chairman Sixto Brillantes Jr. predicted that 12 winning senators would be proclaimed in 48 hours after the polls. In making the bold prediction though, Brillantes failed to disclose something – he was of Mayan descent.

Winners All
In the 2013 midterm elections, Grace Poe emerged as the biggest winner. She was closely followed by ABS-CBN and GMA Network.

Lucky
Losing in the initial tally, reelectionist Mayor Mariano Malones Sr. of Maasin, Iloilo conceded defeat to his opponent Elben Malaga only to win by FIVE votes after the final count. Malaga is filing a case against Malones for giving him false hope.

Camarines Sur’s youngest governor Migz Villafuerte vows to continue the Villafuerte legacy. Cam Sur is still one of the poorest provinces in the country. You might want to reconsider that hijo.

After serving time for drug possession, Ronald Singson is back in Ilocos, back in politics, and back in Congress. He refuses to go back to Hong Kong though.

Atty. Leni Robredo scored a landslide win against Nelly Villafuerte, the matriarch of the influential Villafuerte clan and dynasty of Camarines Sur. Robredo got 102,694 votes while Villafuerte got embarrassed.

After conceding defeat in Cebu, Annabelle Rama tweeted, “Its not the end of my political career.” Correction: It ended before it began.

Anjo Yllana won as councilor in Quezon City’s fifth district. It turned out that voters in that area in QC were former residents of Parañaque City.

Joey Marquez was unsuccessful yet again in Parañaque. In recent years, he’s been losing elections in the city. One more loss and he’ll just transfer to QC.

Manny Pacquiao was reelected representative of the lone district of Sarangani. He was unopposed. Nobody’s interested to challenge Pacman anymore. Not the Chiongbians, not the Marquezes, not the Mayweathers.

Newly-proclaimed Manila Mayor Joseph Estrada says his top priority is fixing the problem of ‘peace and harmony.’ To prove his sincerity, he’ll start with Jinggoy and JV.

Sound Bites
“We had a dynasty, that I don’t deny. But no law states that is wrong.”
~Romeo Jalosjos of the Jalosjos dynasty of Zamboanga. Only 2 of 6 family members won in the last elections