A FEW QUESTIONS for senatorial candidates that won’t probably be asked on live TV: 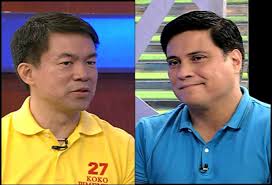 Migz Zubiri
The latest SWS survey showed you’re at No. 15. Pretend that election cheating is legal. Will you cheat to win?

Chiz Escudero
Mark Twain wrote,”Adam was the luckiest man; he had no mother-in-law.” Elaborate.

Marwil Llasos and JC De Los Reyes
Without citing verses from the Bible and/or other Paleolithic passages, defend your staunch opposition to the RH Law and same sex relationship.

Koko Pimentel
History. If your ex-wife’s name is Cleopatra, who is the love of her life?

Grace Poe
Are you as annoyingly respectful in person as depicted in those political ads?

Greco Belgica
Some of your tweets were homophobic. Explain the evolution of your bigotry.

Bam Aquino
In your TV ad, you said that Ninoy, Cory and Noynoy inspired you. Were you not inspired by your father?

Nancy Binay
Given two decks of cards and zero track record, calculate the probability that you’ll win a Senate seat if your last name was not Binay.

Mitos Magsaysay
What part of “NO!” don’t you understand?

Ernie Maceda, Mr. Exposé
If you were to expose something about yourself, what will it be and why?

Have a safe and fun vacation!