Warning: This post may offend religious feelings. Continue reading at your own risk.

THE SEARCH is over. There’s a new pope… a new old pope. 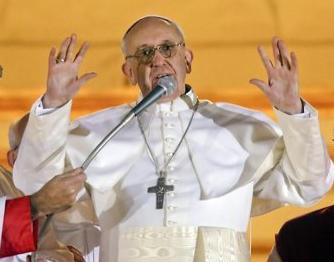 Latin American Cardinal Jorge Mario Bergoglio, 76 was not considered as a frontrunner for pope. In fact, in the days leading up to the conclave, he was off the radar; suddenly he’s up there. Very Bam Aquino.

Breaking: The United Nationalist Alliance is questioning the result of the balloting.

Did you hear Cardinal Jorge Mario Bergoglio’s first speech as pope? CNN said the speech was “unconventional.” Some people believe it was “refreshing” and Tito Sotto was like, “Where can I get a copy?”

A cardinal from Argentina has been elected Pope! As winner, the new pope gets a new iPad from Jamby Madrigal.

A new pope has been elected. If things go wrong under his leadership, he can always blame the previous administration of Pope Macapagal-Arroyo.

A Latin American is the new pope. Perceived frontrunners including a Filipino were snubbed by the College of Cardinals. Malacañang smells a conspiracy.

Thousands of Catholics gathered in St. Peter’s Square to welcome the new pope. As throngs waited for the announcement, someone in the crowd shouted, “Tagle! Tagle!” And then Pope Francis appeared and said, “You don’t do that to me!”

With or without a new pope, Migz Zubiri said “we’ll make baby No. 3!”

For at least two hours on Thursday, the Top 10 trending topics on Twitter worldwide were all pope-related. No Justin Bieber, no One Direction. That was Pope Francis’ first miracle!

The Roman Catholic Church is facing daunting challenges. That’s probably the reason why they chose Cardinal Jorge Mario Bergoglio, a Jesuit with a master’s degree in chemistry. He has the solutions.

Some reports say Cardinal Jorge Mario Bergoglio was the runner-up to Pope Benedict XVI in the 2005 conclave. I didn’t know Vatican adopts beauty pageant rules. “If for any reason…”

Ok, it’s done. We have a new pope. The frenzy is starting to subside. The Roman Catholic Church can now continue promoting its anti-homosexual, anti-women, and anti-choice stance. Habemus papam!
——————————————-
“I like the silent church before the service begins, better than any preaching.”
~Ralph Waldo Emerson, Self-Reliance and Other Essays

Sound Bites
“When I approached Pope Francis to assure him of closeness and collaboration of Filipinos, he said, ‘I have high hopes for the Philippines.'”
~Manila Cardinal Luis Antonio Tagle