AFTER MORE THAN A WEEK of warnings and tug-of-war, the United Nationalist Alliance decided to drop three common candidates from its senatorial ticket. It is also dropping ‘United’ from its name. 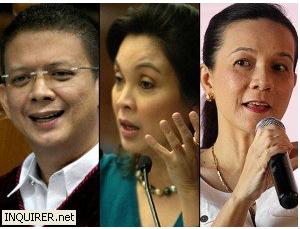 UNA has dropped three common candidates from its senatorial lineup. Chiz Escudero described the move as a ‘change of heart.’

The bad news is UNA has junked Escudero, Poe and Legarda. The good news is Brad Pitt and Angelina Jolie want to adopt them.

After dropping three of its 12 candidates for senator, one of UNA’s “three kings,” Vice President Jejomar Binay said, “We’re starting to become a family.” With Nancy, JV, and Jackie Enrile in the ticket, we can see that.

Jamby
Liberal Party candidate Jamby Madrigal has apologized for the “iPad game” on Twitter which, she claimed was initiated by her “young volunteers.” Her lawyer, Ernesto Francisco added she didn’t violate any election law. He insisted “it was a fun game.” The winner of the iPad agreed.

Edsa 1
On Monday, February 25, 2013, the Aquino administration leads the 27th anniversary celebration of the Edsa People Power revolt. Malacañang did not declare Monday a non-working day but decided to suspend classes in all levels – to the delight of thousands of students who were wondrin’ what the event was all about.

Thanks to the bloodless revolt of ‘86, freedom was restored. Democracy is so back. And so are the Marcoses.

Resigned
In Europe, the Prime Minister of Bulgaria resigned after nationwide protests against rising cost of electricity. Apparently, Bulgarians are so much way ahead of us.

After massive protests against high electricity rates, high ranking government officials in Bulgaria stepped down. For a moment, I wished our leaders were Bulgarian. 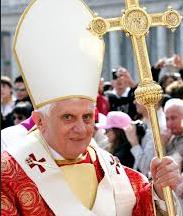 The Pope
As soon as Pope Benedict XVI leaves office, he will receive about $3,500 (₱143,500) in retirement package. Not bad for someone who took the vow of poverty.

In less than a week, Pope Benedict XVI will step down. The next pope has some big eyes to fill.

Victorious Pistorius
Accused of murdering his girlfriend on Valentine’s Day, Olympian Oscar ‘Blade Runner’ Pistorius was allowed to go free on bail by a South African magistrate! They let him walk! 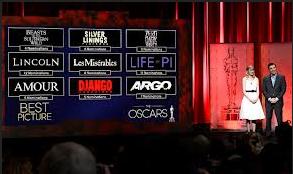 The Oscars
On Monday morning (Manila time), the annual Academy Awards will be held at the Dolby theater in Hollywood. My all-time favorite part of the Oscars is the “In Memoriam” segment – where a VTR is shown to remind celebrities that no matter how glamourous or popular they are today, they’re going to die someday.

It’s the Oscars on Monday. Among the stars who who will be remembered in the ‘In Memoriam’ segment include Whitney Houston, Dick Clark, Michael Clarke Duncan, and Crocodile Lolong.

On Monday, Anne Hathaway will probably win an Oscar. I mean, she was really powerful – in that Ricky Lo interview.
————————————————–
“If a political party does not have its foundation in the determination to advance a cause that is right and that is moral, then it is not a political party; it is merely a conspiracy to seize power.”
~Dwight D. Eisenhower 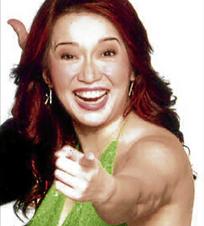 Sound Bites
“I’ve refrained from commenting about the Senatorial elections but since I’m a responsible, law abiding, very high income tax paying citizen, honestly Senator Loren & Senator Chiz have consistently been 1 or 2 in the surveys, take turns lang sila. I personally know Grace Poe & believe in her integrity & intelligence & in fact committed to join her & Chiz all the available campaign days left in May before the 13th.
~TV host and presidential sister Kris Aquino via Twitter