THE COMMISSION ON ELECTIONS is investigating Liberal Party’s Jamby Madrigal for conducting a game on Twitter and Facebook with an iPad as prize. Well, that is totally wrong! She should be giving away at least 100!

Manila Battle
Have you been following the word war between Manila politicians over a Bingo game? Mayor Lim said it was illegal gambling. Isko Moreno insisted it was political harassment. I believe it’s publicity.

Guide for Voters
The Parish Pastoral Council for Responsible Voting released “The 10 Commandments for Responsible Voting,” a guide for voters. The PPCRV said we should not vote for candidates who use “guns, goons, gold, and glitter;” “tainted with graft and corruption,” and “living an immoral life.” The group also advised the public not to vote “because of utang na loob, popularity, good looks, or pakikisama.” In short, leave the ballots blank.

Ces vs. Borneo
Journalist Ces Drilon was offended by the tweets of a member of the staff of senatorial aspirant Teddy Casiño. Reports say Teddy’s legislative officer Vince Borneo called Ces a “teleprompter reader.” Borneo also tweeted, “You have to hit at bitches to keep them in check.” When Ces Drilon read the tweets, she saw red. 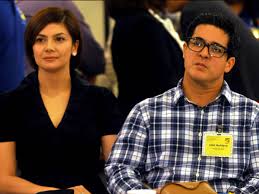 Approved
The Court of Appeals ruled that actor Aga Muhlach and his wife Charlene Gonzales are registered voters of San Jose, Camarines Sur. The inexperienced Muhlach is seeking a seat as a member of the Philippine legislature. I have no idea why Bicol is being punished.

Virus
The Health Department warns the public about the “new coronavirus.” A person infected with the new coronavirus just walks out of a meeting and then returns on a wheelchair.

Murdered
In Russia… a politician was found dead inside a barrel filled with cement. Nah. I don’t think it would be fair to use the names of Sen. Panfilo Lacson and former president Joseph Estrada as punchlines. I’ll never do that.

A Russian lawmaker was found dead inside a barrel filled with cement. Authorities have identified a suspect. They’re just gathering concrete evidence.

Hacked
In the US… Burger King’s Twitter account was hacked and replaced with the logo and photos of its rival, McDonald’s. When will hacktivists replace Burger King’s and McDonald’s’ current menus with real food?

In a statement, Burger King’s rival McDonald’s said, “Rest assured, we had nothing to do with the hacking.” And then ended the statement with a smiley.

Psy’s Concert
Contrary to what I predicted, the South Korean pop sensation sang ‘Gangnam Style’ not 30 times but twice, just twice in his sold-out concert last Saturday. What a Psy of relief!
—————————————-
“A politician thinks of the next election; a statesman thinks of the next generation.”
~James Freeman Clarke, Sermon