THE WORLD’S LARGEST crocodile in captivity is dead. Our deepest condolences to Congress. 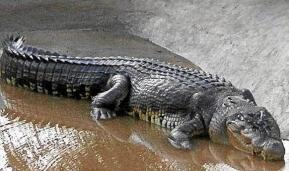 Crocodile Lolong is dead. Interment to be announced soon. But unconfirmed reports say Lolong’s body will be brought to the Bureau of Customs for a two-day wake.

There’s no news yet on the cause of Lolong’s death but some sources say the crocodile got depressed when he was not drafted for senator.

Lolong is gone. Experts have yet to determine the cause of his death but Malacañang is already blaming the previous administration.

February 12 is the official start of the campaign period for national candidates. Lolong’s legacy will probably live on.

Still confirming sketchy reports that Lolong’s final words were: “I am sorry.”

BREAKING: Philippine Congress has filed a joint resolution on the death of Lolong. Here’s an exclusive copy.

Republic of the Philippines
Philippine Congress
Joint Resolution No. 9765

WHEREAS, Crocodile Lolong peacefully joined his creator yesterday, February 10, 2013 at 8:05PM of undetermined cause in Bunawan, Agusan Del Sur;

WHEREAS, Lolong shot to prominence after Guinness World Records representatives and international crocodile experts confirmed it to be the world’s largest in captivity;

WHEREAS, Lolong touched the lives not only of Bunawan residents but of Filipinos here and around the globe for setting a world record;

WHEREAS, Lolong and his family are an ‘inspiration’ to many of us here in Congress and the government;

WHEREAS, Lolong ‘represents’ many, if not all of us here in Congress, thus he will be missed, and will always be remembered.

NOW, THEREFORE, BE IT RESOLVED BY PHILIPPINE CONGRESS to express its profound grief and sorrow on the demise of one of our own… Crocodile Lolong.

RESOLVED, FURTHER, that a copy of this resolution be furnished to the Bunawan (Agusan Del Sur) Municipal Council.

6 thoughts on “SO LONG, LOLONG”