The Philippine National Police denied there was foul play in the killing of at least 13 suspected members of a gun-for-hire syndicate in Atimonan, Quezon. A victim’s relative insisted it was a “rubout.” Police said it was a “shootout.” Carlo J. Caparas said it’s a potential box office hit.

With the highest aggregate score, President Aquino bested more than 100 generals and other police and military officers to win the executive category of “Games of the Generals 2013” – a shooting competition. In second place were cops from Atimonan, Quezon.

Following the spate of gun-related violence, Congressman Orlando Fua called on President Aquino to give up his gun. But there was little likelihood that the President would budge. Malacañang says the request is rather personal. It’s like asking Fua to give up his pork barrel.

One of those killed in Atimonan, Quezon was Supt. Alfredo Perez Consemino, chief of operations of Police Regional Office in Mimaropa. The PNP has denied rumors that an Akbayan member will be appointed as caretaker.

Promising
London-based luxury travel magazine Conde Nast Traveler named the Philippines as one of the “Destinations to Watch in 2013.” The magazine identified Palawan, Bicol and Siargao as places to visit – while Kawit, Kalookan and Atimonan were named places to avoid.

Hacked
Tito Sotto’s website has been defaced. The hackers told Sotto, “You cannot shut us up.” To which, Sotto replied, “Ako rin.”

Overseas
A 26-year-old social media activist was sentenced to two years in prison for reportedly “insulting” Kuwait’s emir. I don’t think that’ll happen in the Philippines. Here, we don’t insult leaders and politicians. We describe them.

In Saudi Arabia, a 90-something-year-old man married a 15-year-old girl. And Hugh Hefner was like, “Hiyang-hiya naman ako sa ‘yo!”

In Washington DC, President Barack Obama nominates John Brennan as CIA Director – a position originally reserved for David Estes – until he was killed in a terrorist attack at CIA headquarters.

Phone Problem
My new phone autocorrects a number of words I type. This morning, it autocorrected ‘pork’ to ‘Congress.’ I have no idea why.

January 8
The 8th of January marks the end of the 2012 Metro Manila Film Festival. In other news, feng shui experts say 8 is a lucky number. I agree.

January 9: Feast of the Black Nazarene 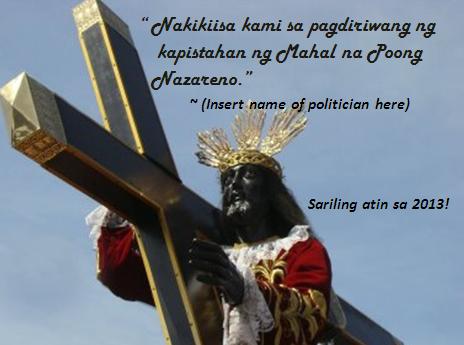 “Violence is an evil thing, but when the guns are all in the hands of the men without respect for human rights, then men are really in trouble.”
~ Louis L’Amour, The Daybreakers