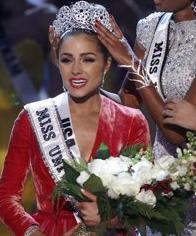 MISS USA Olivia Culpo was crowned Miss Universe 2012. Janine Tugonon of the Philippines was first runner-up. If, for any reason, the new Miss Universe fails to fulfill her duties or does not survive the Apocalypse, Miss Philippines will take over.

Miss USA is Miss Universe 2012. If, for any reason, she fails to fulfill her duties, then she must be the president of America.

When Miss USA, Olivia Culpo was declared winner, she was ecstatic. Apparently, she wasn’t informed that her reign ends at 11:59PM on December 20. 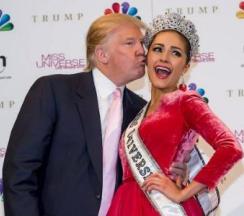 A panel of judges voted for Miss USA. The Catholic Bishops’ Conference of the Philippines accused the White House of pressuring them.

Miss Philippines-Universe Janine Tugonon was outvoted by Miss USA. Catholic bishops threaten to bring the issue to the Supreme Court.

To be fair to the 2-hour Miss Universe telecast from Las Vegas, Catholic priests totally enjoyed it!

Filipino lawmakers also cheered for Janine Tugonon during the live telecast. All of them believed in her – although Congressman Crispin ‘Boying’ Remulla would have still abstained if he was a judge.

Janine Tugonon lost. Can somebody confirm reports that Mitt Romney met with her before the pageant to say good luck?

Miss Venezuela was stunning! When asked, ‘If you could make a new law, what would it be and explain why,” she answered, “Kghtramljuate juatmdofh weksurg ftxiryd surfer. Pjhrygftgrt ertsg dnhuakrta law. Thank you Vegas!” She lost.

Miss China failed to make the cut but Beijing was still proud. The semifinalists wore swimsuits made by Chinese kids in Guangdong.

This year, Donald Trump and the Miss Universe Organization asked the public to tweet a question for the finalists. The top question that wasn’t read on the show was, “If the world’s going to end on Dec. 21, what the hell are you doing here in Las Vegas? Aren’t you supposed to be with your family?”

Donald Trump opened the Miss Universe pageant in a Santa costume. For a moment, I thought the Mayan prophecy has begun.

Miss Philippines lost to Miss USA. And this just in: Bob Arum wants a rematch!
————————————————-
“Nature didn’t need an operation to be beautiful. It just was.”
~Scott Westerfeld, The Uglies Trilogy

TIME magazine picked US President Barack Obama as Person of the Year. I guess the killing of Abu Nazir nailed it for him.

Sound Bites
“For me, being Miss Universe is not about knowing how to speak a specific language. It’s about being able to influence and inspire other people. So whatever language you have, as long as your heart is to serve and you have a strong mind to show to people, then you can be Miss Universe.”
~Miss Universe-Philippines Janine Tugonon when asked by pageant judge Nigel Barker if English should be a prerequisite to becoming Miss Universe

Have a safe weekend! Happy Holidays!