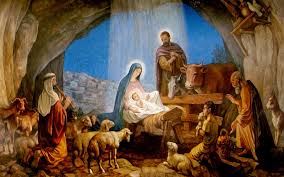 POPE BENEDICT XVI has just released the third installment of his trilogy called “Jesus of Nazareth: The Infancy Narratives.” In the new book, the Pope disputed the date of Jesus Christ’s birth. It’s official! Christmas 2012 is canceled!

On second thought, this could just be a commercial ploy. Imagine having two Christmases in a year. Gastos!

In his new book, Pope Benedict XVI said the “actual date of Jesus’ birth was several years before.” Tito Sotto demanded to see the birth certificate.

The Pope also revealed that no animals were present at the birth of Jesus contrary to what has been popularly depicted in the Nativity scene. First, Santa Claus. And then, this! Our Catholic childhood was built on a lie!

No. 5: The three wise men who traveled with gold, myrrh, and frankincense were held up on their way to the manger. The robbers took the gold.

No. 4: Joseph had a girlfriend before he was ordered by the angels via a dream to take Mary as his wife. His distraught and misinformed parents requested a DNA test.

No. 3: Jesus was born in Hawaii to a Kenyan father, studied in Indonesia until the 4th grade, and then returned to mainland United States when he was 11.

No. 2: Shocked shepherds fled when they saw the gravity-defying, floating choir of angels.

And the No. 1 predicted revelation in Pope Benedict XVI’s future books…

Mary found out that she’s pregnant NOT because angel Gabriel told her but because she missed her period.

In Other News…
The Commission on Elections announced that the Parish Pastoral Council for Responsible Voting or PPCRV will be its official citizens’ arm for the 2013 midterm elections. NAMFREL will issue a statement as soon as it finishes its 2010 quick count.

According to Archbishop Emeritus Oscar Cruz, several politicians running in the 2013 midterm elections receive campaign funds from illegal drug syndicates and gambling lords. Cruz’s revelation came as a total shock – to no one.

Associate Justice
Newly-appointed Supreme Court Associate Justice Marvic Leonen – who’s only 49 years old, would probably be in office for the next 21 years! Or as the Binays of Makati and the Villafuertes of Bicol would call it, “Normal lang.”

Emotional
According to a Gallup poll, Filipinos are the most emotional people in the world. ‘Di nga?! Wow. I’m overwhelmed. I wanna cry!

The same survey showed that Singapore was the most emotionless society. Sought for reaction, Singaporeans replied, “No comment.”

Gallup: The World’s Most Emotional Societies