I MISSED DAY 26 of the Corona Impeachment Trial because I watched a movie called ‘This Means War.’ I felt like a loser after when I learned that a real war happened inside the impeachment court.

Apparently, senator-judge Miriam Defensor-Santiago used the word “gago” and “mayabang” to describe the prosecution panel. To which, prosecutors protested, “With all due respect, hindi po kami mayabang!”

Private prosecutor Vitaliano Aguirre insists he’s had enough of Senator Santiago’s lectures and criticisms, he opted to cover his ears… which totally surprised everyone who was instead expecting Niel Tupas to cover his face.

The decision of the senator-judges was unanimous. Private prosecutor Vitaliano Aguirre was cited for contempt… for looking like an idiot on nationwide TV.

Private prosecutor Vitaliano Aguirre was cited for contempt for disrespecting a member of the impeachment court. Under the rules, Aguirre may be ordered to pay a fine of 2,000 pesos, imprisoned for no more than 10 days, or forced to listen to “The Best Of Miriam’s Mad Moments Volume 1.”

No. 7: There’s Something About Miriam

No. 2: The Day the Ear Stood Still

And the No. 1 movie remake starring Atty. Vitaliano Aguirre and Sen. Miriam Defensor-Santiago…

The Pest and the Furious

Apology
On Thursday, March 1, lawyer Vitaliano Aguirre quit the prosecution panel. He also apologized to Sen. Miriam Defensor-Santiago for hurting her feelings. There’s no word yet on whether Santiago will apologize to Aguirre for hurting his eardrum. 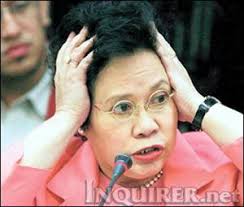 Deferred
The International Criminal Court has allowed Sen. Miriam Defensor-Santiago to defer her scheduled March 9 oath-taking at The Hague, Netherlands. And the prosecution panel was like, “Hell, no!”

The ICC has allowed Sen. Miriam Defensor-Santiago to defer her scheduled March 9 oath-taking in the Netherlands. Even the ICC’s afraid of her.

The Bar
Christopher John Lao, the UP Law grad who drove his car into an inundated road last year has passed the bar. His cellphone as well as his Facebook & Twitter timelines were flooded with congratulatory messages.

On Twitter, Chris Lao expressed his gratitude to those who supported & prayed for him. The ecstatic new lawyer thanked everyone… except for GMA News’ Jun Veneracion.

For the first time in 27 years, not a single UP Law grad made it to the list of Top 10 bar passers. And Renato Corona was like, ‘Don’t look at me!”

Peace
Reports say Annabelle Rama and former TV executive Wilma Galvante have kissed and made up. That’s bad news… for their lawyers. 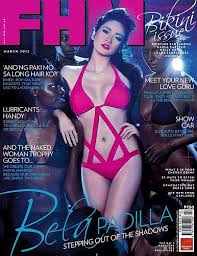 FHM Racist?
I’m sure you’ve seen the alleged “racist” cover of FHM Philippines. Do you know Bela Padilla? Yeah, me neither.
——————————————————–
“Two things are infinite: the universe and human stupidity; and I’m not sure about the universe.”
~Albert Einstein

“The caption was meant for the article and not for the picture.”
~Bela Padilla on her controversial FHM cover