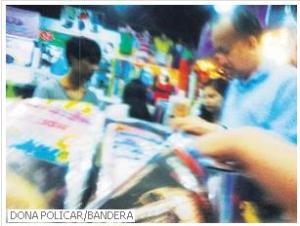 To be fair, the guy (I think) is honest. When his security aides were caught with an AK-47 assault rifle in October 2011 following a road accident, presidential adviser on political affairs Ronald Llamas admitted he had at least five firearms. Anytime now, Llamas will admit to owning at least five sacks of pirated DVDs.

This just in: The Optical Media Board headed by actor Ronnie Rickets will conduct a raid at Circle C mall on Congressional Avenue in Quezon City. They will follow that up with a raid at Secretary Llamas’ residence.

Informed of the Ronald Llamas incident, President Aquino said, “Pasensiya na kayo kung hindi yan ang number one sa priority ko.. In totally unrelated information, records reveal that in high school, Llamas was voted ‘Most likely to get away with everything.’ 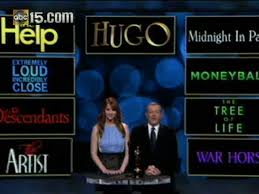 The Oscars
The nominations for the 84th Academy Awards have been announced. Nine films will vie for Best Picture Oscar. The list includes ‘The Descendants,’ ‘The Artist,’ ‘Hugo,’ ‘War Horse,’ ‘Extremely Loud and Incredibly Close,’ ‘Moneyball,’ ‘Midnight in Paris,’ ‘The Tree of Life,’ and ‘The Help.’ Unfortunately, I haven’t seen ANY of these films. My initial plan was to buy a copy… but then again, why spend if I could just borrow from Secretary Ronald Llamas?

Supporting Actor nominees include Kenneth Branagh for ‘My Week With Marilyn;’ Nick Nolte for ‘Warrior;’ Jonah Hill for ‘Moneyball;’ Christopher Plummer for ‘Beginners;’ and Max Von Sydow for ‘Extremely Loud and Incredibly Close.’ Perhaps the biggest snub was the omission of Frank Drilon for his supporting role in the prosecution panel.

Day 5: Impeachment Trial
On Tuesday, January 24, the prosecution panel failed to present a memorandum explaining its inclusion of the ill-gotten wealth issue in Article 2 of the eight Articles of Impeachment. Presiding Officer Juan Ponce Enrile was compelled to adjourn the trial and no prosecution witness was presented. Evidently, the defense panel scored on that one. Or as Philippine media would say it, “Day 5 goes to the prosecution.”

After less than two hours, Day 5 of the impeachment trial was adjourned. Shortly after, the prosecution team’s spokespersons were presenting their evidence to the media.

Senator-judge Miriam Defensor-Santiago, who attended the impeachment trial for the first time, scolded the “unprepared” prosecution panel… with the exception of its spokespersons who were always prepared for press cons. 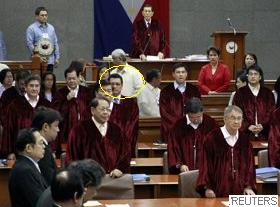 Senator-Actor
Despite the ongoing impeachment trial of Chief Justice Corona, Senator-judge Lito Lapid signed a deal with ABS-CBN. Just to clarify, it’s a deal for a soap opera; not a deal to convict Corona.

Overseas…
President Barack Obama delivered his State of the Union Address (SOTU) Wednesday morning (Manila time). There was this awkward moment when the President vowed to implement reforms by filing cases against former President Gloria Macapagal-Arroyo.

Fashion enthusiasts were all eyes on US First Lady Michelle Obama. She looked fab in a royal blue dress. In a press con after Obama’s SOTU, the First Lady denied rumors she bought the dress from SM.

President Kris
Kris Aquino will become the 17th president of the Republic of the Philippines according to Half-British and half-Indian psychic Robert Das. That prediction was half-bull, half-sh*t.
—————————————————————————————-
“The will to win is worthless if you do not have the will to prepare.”
~Thane Yost

Quotes of the Day
“Our request is for the Honorable Tribunal to be more liberal in the asking of questions by the prosecution.”
~Lead prosecutor Niel Tupas to Presiding Officer Juan Ponce Enrile