TODAY’S JOKE:
>The Prosecution Panel.
There.

On Tuesday, the Senate postponed the impeachment trial of Chief Justice Corona. The prosecution panel requested the postponement because they were not ready to present evidence. Apparently, they were better prepared when it comes to presenting evidence to the media.

Remember last week when public prosecutors insisted that they were the underdogs? Today, they proved it.

Cavite Representative Elpidio Barzaga Jr, a member of the prosecution team admitted they were not prepared to present evidence for Article No. 1. To which Corona said, “I love you too!”

Cong. Elpidio Barzaga Jr was a top trending topic on Twitter Philippines following his ‘debut’ in the impeachment trial. When told of his ‘online feat,’ Barzaga was doubtful, and demanded to see the computer-generated evidence.

The prosecution panel bungled Day 2 of the Corona impeachment trial. In other news, President Aquino ordered the Budget Department to not release the solons’ pork barrel – until further notice. 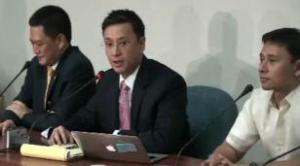 Right now, not even the goodlooking spokespersons of the prosecution team can erase the perception that the team is so NOT ready for this trial.

In fact, I seriously believe that Conrado De Quiros is better prepared than these public prosecutors.

If it’s any consolation, the prosecution panel proved one thing today – it’s more fun in the Philippines!

Quote of the Day
“The prosecution is not prepared to present evidence today, the court moto propio postpones the trial until tomorrow afternoon at 2:00.”
~Sen. Juan Ponce Enrile, Presiding Officer

Pic of the Week

DAY ONE
To say that January 16 was an action-packed day would be an understatement. Aside from the unknown fact that it was my birthday, it’s also the first day of Chief Justice Renato Corona’s impeachment trial. Then you have the annual Golden Globe Awards and the start of the Australian Open. The Golden Globes are 69 years old and the Aussie Open is on its 107th year. You add that up and you get the age of Corona’s legal counsel Serafin Cuevas. 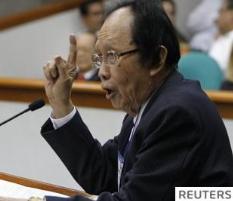 You’ve got to stand in awe of Serafin Cuevas and Juan Ponce Enrile. Those guys are still sharp! Isn’t this their third lifetime already?

Give credit to the Senate President for being decisive. He was able to take full control of the proceedings. The only thing he can’t control is the smuggling of luxury cars in Cagayan.

Compared to Day 1 of the Estrada impeachment trial, observers say the opening day of Corona’s trial lacked drama and fireworks. In other news, Loren Legarda and Miriam Defensor-Santiago were absent yesterday.

I was able to monitor both the Golden Globes and the first day of the Impeachment Trial. Sorry to say this but Ricky Gervais’ opening was more impressive than Niel Tupas Jr’s. 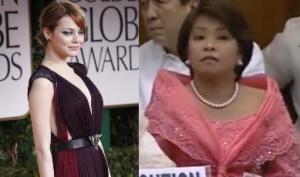 Combative
Chief Justice Renato Corona delivered a fiery, combative speech before a throng of supporters outside the Supreme Court Monday morning. At one point, he was interrupted by an avid supporter who shouted, “I love you CJ!” And Atty. Midas Marquez was like, “Hindi ako ‘yon huh!”

In his speech, the Chief Justice accused three individuals, whom he refused to identify, of conspiring to unseat him. A vehement denial was immediately issued by ABS-CBN, ANC, and dzMM.

On ANC, Sec. Mar Roxas just laughed off the allegation that he is a co-conspirator to oust the Chief Justice. He can’t even oust Jojo Ochoa!

“The Descendants” was named Best Motion Picture-Drama at the 69th Golden Globe Awards… to the utter shock of the producers of “Manila Kingpin: The Asyong Salonga Story” who expected that their project would win the award.

Meryl Streep won yet again. She’s been winning for like forever. The Binays can totally relate. 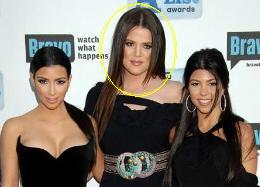 The Kardashians
There have been rumors that Khloe Kardashian is not really a Kardashian. If that’s true, then she’s probably a Gutierrez.
———————————————————————————–
“If the laws could speak for themselves, they would complain of the lawyers in the first place.”
~Lord Halifax

47 thoughts on “THE FIRST TWO DAYS”