The House prosecution panel defied a Senate gag order by showing the media pieces of evidence against the Chief Justice before the trial proper. The panel headed by Niel Tupas insists it’s simply a question of right and wrong. They’re right, Corona’s wrong.

The House prosecution panel has 11 solon members plus 59 private lawyers. And I heard they’ll occupy the biggest room in the Senate building. The room will be marked, “Sorry for the inconvenience. Your taxes working for you.”

A member of the House prosecution panel wants Chief Justice Renato Corona to explain how he was able to acquire that huge number of properties. To be fair, congressmen would have ‘understood’ Corona if he had pork barrel.

Retired Archbishop Emeritus Oscar Cruz visited the Chief Justice to give his support and “blessing.” The outspoken prelate believes the impeachment trial is a “political gimmick” with “no merit at all.” To which God said, “Labas ako d’yan huh!”

In a tweet, senator-judge Pia Cayetano, known for being a health buff says she’s “training” both her body and mind for long hours in preparation for the impeachment trial. Not to be outdone, Sen. Lito Lapid is reportedly preparing for the trial too – by getting more sleep.

Arroyo vs. Aquino
Apparently, former President Gloria Macapagal-Arroyo was able to write an ‘economic’ paper castigating the Aquino administration for ‘squandering’ the gains of previous governments, including hers. The paper’s working title was “Burnt Legacy.”

In a paper titled, “It’s the economy, student,” CGMA lambasted President Aquino for espousing the kind of politics that creates division rather than unity. And the President was like, “Hellooooo! Suarez and Lagman!”

Mrs. Arroyo also took a swipe at President Aquino’s alleged laid back work style saying, “There is no room for coming to work late and leaving early.” The President retorted, “Excuse me! That was soooo last year!”

In the same paper, Mrs. Arroyo trumpeted that “nearly nine out of 10 Filipinos had access to health insurance.” Tell that to Accenture employees! 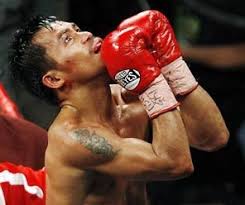 A New Pacquiao
In an exclusive interview aired on ANC, Manny Pacquiao revealed that he’s a changed man. He didn’t say though if that’s to complement his wife’s changed appearance.

According to Manny Pacquiao, he encountered God in a dream. He said he was in a forest when suddenly he heard a voice asking, “Why are you going away from me?” Either it was God or his son by ex-girlfriend Joanna Bacosa.

Ronald’s Back
More than a year after he was arrested in Hong Kong for illegal drug possession, former Ilocos Sur Representative Ronald Singson is a free man. When he arrived Saturday in Vigan, he was in high spirits.

Ronald Singson has completed serving time in prison. That’s the difference between him and Sen. Lito Lapid. Lapid cannot even finish a sentence.

Sociable
The HSBC Expat Explorer Survey showed that the Philippines was the world’s second best place for expats to ‘socialize’ and ‘make friends.’ Curiously, in first place was “on Makati Avenue or Burgos Street.”

Drug Den
In the last 14 days, a total of three shabu laboratories were discovered and raided in the upscale Ayala Alabang subdivision in Muntinlupa City. Before the first raid though, there was this tense moment as Ayala Alabang officials demanded a prescription from the raiding team.
———————————————————————————————
“Make Crime pay. Become a lawyer.”
~Will Rogers

Quotes of the Day
“Neither the President nor anyone else can truly expect to govern the next five years with nothing but a sorry mix of vilification, periodically recycled promises of action followed by lethargy, backed up by few if any results, and presumptuously encouraging gossip about one’s love life in which no one can possibly be interested. Given the electoral mandate that he enjoyed in 2010— the same size as mine in 2004, as predicted by every survey organization at that time—our people deserve more, and better, from him.”
~Former President Arroyo, “It’s the economy, student.”

“It’s a political manifesto masquerading as an economic paper presented in a press briefing disguised as a colloquium!”
~Palace spokesman Edwin Lacierda’s reaction to Mrs. Arroyo’s paper via his Twitter account @dawende

Have a safe and productive week ahead!

37 thoughts on “READY TO RUMBLE”