FENG SHUI MASTER Joseph Chau declares President Aquino will be lucky in love in the coming Year of the Water Dragon. In other news, another feng shui master predicts Mr. Chau will lose his credibility this year.

According to feng shui master Joseph Chau, President Aquino will be lucky in love this year and that, “The First Lady is coming out.” To which, Secretary Mar Roxas said, “Don’t look at me.”

President Aquino was born in the Year of the Rat. Master Chau says Rats who are in politics shall have positive reputation throughout the year. Ok, tell us something that Pulse Asia and SWS haven’t been trumpeting since 2010. 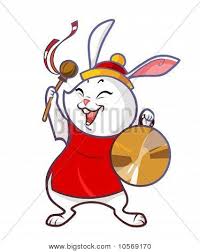 To ward off negative energies in Malacañang, feng shui master Joseph Chau advised President Aquino to “make noise” by hitting a gong at the entrance of his office six times everyday. Either that, or invite ‘Kris Aquino.’

Chau also advised the President to place behind his desk a pair of “Happy Hippos.” Again, ‘hippos’ Mr. President. Not, Zippos. 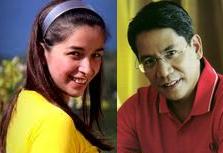 On Shalani’s Wedding
Asked if he would attend the wedding of his ex-girlfriend Shalani Soledad, the President said, “In this particular case, I would have to provide the appointments committee the reasons for attending that particular event. It’s not my decision, there are so many factors I have to weigh. I don’t look at my schedule earlier than a day or two days before because it really makes one exhausted, just reading all the engagements you have to go to. I have so many roles and all those roles consume all the time that I have available.” He just said ‘No.’

Asked if he’s attending his ex’s wedding, President Aquino replied, “I have so many roles and all those roles consume all the time that I have available.” To which Shalani Soledad said, “Better.”

Inspection
In preparation for the Corona impeachment trial, the House prosecution panel reportedly visited the Senate for an inspection. They were impressed with what they saw. And some of them can’t wait – can’t wait to become senators themselves.

PCIJ’s Report
According to a report of the Philippine Center for Investigative Journalism, even Lower House members have refused to disclose their statement of assets, liabilities, and net worth or SALN. I think I know why. Have you seen the SALN forms specifically designed for congressmen? The document has a bold heading that reads, “This is where your taxes go.” 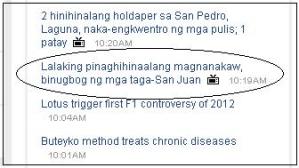 Suspect
This morning. I read a news item on GMA 7’s website. The headline says: “Lalaking pinaghihinalaang magnanakaw, binugbog ng mga taga-San Juan.” And I was like, what the hell did you do with your congressman?!?

Salvage
On Wednesday, a lifeless woman stuffed in a suitcase was found at the parking lot of the NAIA Terminal 2. An hour later, a man’s body was found inside a drum also in Pasay City. In other news, Hollywood producers are so thankful of Philippine authorities for securing the ‘The Bourne Legacy’ shoot.

Who’s King?
The Ring Magazine says Manny Pacquiao is the pound-for-pound king. ESPN believes it’s Floyd Mayweather Jr. To be fair, they’re both kings although Mayweather, according to inmates, will soon become their ‘queen.’

Gayest
According to The Advocate, the gay and lesbian newsmagazine, Salt Lake City in Utah is the gayest city in America. To which. Malate, Manila said, “Bongga!”

Quotes of the Day
“Our emphasis is always to strengthen family. We believe that a lot of the solutions to the problems in the country will be best addressed by a family that is strong, united and strengthening and caring for the children that they bring into this world. We hope that this will be what the union of Roman and Shalani will be able to achieve.”
~President Aquino when asked to give his wish for ex-girlfriend Shalani Soledad and Cong. Roman Romulo

“I’m sorry for her because I know what it is to go through hell like that. If you are on the side of truth, do not be afraid.”
~Ilocos Norte Rep. Imelda Marcos’ to Pampanga Rep. Gloria Macapagal-Arroyo