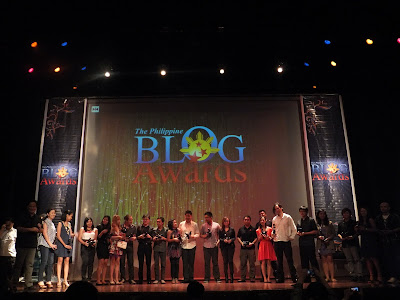 I WAS SUPPOSED to skip Saturday night’s Philippine Blog Awards 2011. Earlier that day, I had a stiff neck and my stomach was acting up. I suspected colitis but my doctor said it was just dyspepsia.

A couple of hours before the ceremonies, a confidante claimed he just uncovered a ‘credible threat’ against me. Refusing to elaborate, he mentioned an alleged plot called “Operation Put the Little Boy to Sleep.” (Disclosure: I am vertically challenged!). I knew it was a sick joke so I confronted him, “Unggoy ka, saan mo nakuha ‘yang tsismis na ‘yan?!” When he heard the word ‘unggoy,’ my friend went ballistic. Feeling slighted, he made ‘sumbong’ to his San Beda Red Lion friends. Minutes later, Coach Frankie Lim and his team were outside our house shouting invectives, threatening to maul the hell out me. Good thing, the police arrived on time, and a melee was averted.

To cut the long story short, I ignored the alleged threat and proceeded to the Carlos P. Romulo Auditorium at the RCBC Plaza in Makati City. On my way to the venue, I received a text message from an unknown number, “Don’t go. You’ll lose. Abort! Abort!” I replied, “Wrong send ka. I’m the Professional Heckler, not Rhian Ramos.”

It was over when I arrived! The ‘Professional Heckler’ had been announced as Best Humor Blog for 2011 when I got there. Wohoo! I won! Take that Philippine Azkals! To a Facebook friend who vowed to have his balls cut off if I lost, you can now heave a sigh of relief.

I may have been tirelessly cheering for the mediocre UP Fighting Maroons men’s basketball team for the past few seasons… but last night, I felt like an Atenean. Four-peat it is!

Thank You!
… to the Philippine Blog Awards! This is my fourth straight win and my fifth trophy from the PBA.
… to my FAMILY.
… to my friends and co-workers.
… to my chief sources of information: the Filipino journalists.
… to my Twitter pals and followers, supporters, and critics.
… to my team, the Los Angeles Lakers.
… to KC and Piolo, sa mga pulitiko, abogado, at taong-gobyerno – mula sa Pangulo pababa sa itlog ni Topacio.

And most of all, to you – my THINKING READERS sa walang sawang pagbisita sa blog na ito. Maraming salamat!

Oh, remember the friend who told me about “Operation Put the Little Boy to Sleep?” He heeded my advice. He’s now seeking psychiatric help.

The above photo was taken from PinoySocialMedia.Com whose owner also covered this year’s event.

Pasasalamat
I am giving away 10 copies of the recently released book “The Best of Chico and Delamar’s The Morning Rush Top 10” – the Foreword of which was written by, ehem, me. So if you want to have a copy, email me your full name and address, and Twitter account (professionalheckler@yahoo.com). I will randomly select 10 names from the entries. Good luck! Winners will be announced Tuesday night, 9:30PM live on Twitter!

Btw, the P.S. part in the book’s foreword wasn’t supposed to be there. It’s not part of the final draft. Na-print lang. Waaaaah!