Breaking News: Scientists at the Italian Institute for Nuclear Physics confirm there’s such a thing faster than the speed of light. It’s Judge Jesus Mupas of Pasay City RTC Branch 112.

Reviled by probably, a majority of her countrymen for her alleged sins against them, former Philippine President Gloria Macapagal-Arroyo was served an arrest warrant Friday… alive. Take that Libyans!

A warrant of arrest was issued by the Pasay City RTC even before the Arroyos could get to NAIA for their 5PM flight Friday. If it’s any consolation, that saved them time, effort, and their lawyer’s testicle.

When Mrs. Arroyo’s lawyers heard that a warrant of arrest was to be served Friday evening, they reportedly told the former president, “Brace yourself.”

Apparently, Judge Mupas found probable cause against Mrs. Arroyo based on the statements given by the likes of Lintang Bedol, former Ampatuan Sr’s aide Norie Unas, and Zaldy Ampatuan – or as defense lawyers would say, “Acquittal.”

It’s one humiliation after another for Mrs. Arroyo. First, she was barred from leaving by Immigration people. Second, she was ordered arrested. And for almost a week now, her infamy has been eclipsed by her lawyer’s balls.

At press time, Pampanga Rep. Gloria Macapagal-Arroyo is under hospital arrest. At least four guards have been stationed at the St. Luke’s Correctional Facility.

Ahh, life. One day you’re the most powerful person in the country, the next day some Foto-Me employee is taking your mug shot.

On Friday, Cong. Gloria Macapagal-Arroyo was booked for a flight to Singapore. The next day, she was ‘booked’ for a trip to the Southern Police District detention cell.

On Saturday afternoon, Mrs. Arroyo underwent booking procedures. Her mug shots were taken and she was fingerprinted. Expecting the worst, she allegedly phoned a friend and asked, “Will I be visited by 1 million?”

Lawyer Ferdinand Topacio appealed to the media to not release the former president’s mug shots. The police will ask the court to decide on the request… while ABS-CBN News will ask the public to decide via Monday’s TV Patrol poll.

Mrs. Arroyo has been placed under hospital arrest. President Aquino can’t wait for the trial, the verdict, and his next SWS performance rating.

Senior Supt. Joel Coronel of the CIDG says security is kept at a minimum since Mrs. Arroyo is not a flight risk or suicidal. In totally unrelated news, security has been beefed up outside the residence of Sen. Miriam Defensor-Santiago.

Experts say if proven guilty, Mrs. Arroyo could face up to 40 years in prison. In Hollywood, that’s 203 Kim Kardashian marriages. 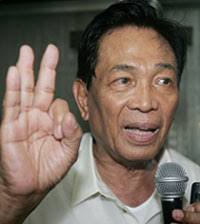 A day after the Comelec en banc voted to file electoral sabotage charges against him, former Comelec chairman Benjamin Abalos was rushed to an unidentified hospital. When he heard about the Comelec’s decision, his blood pressure allegedly shot up to 180 over his dead body he won’t just surrender without a fight.
—————————————————————————————
“There is a higher court than courts of justice and that is the court of conscience. It supercedes all other courts.”
~Mahatma Gandhi